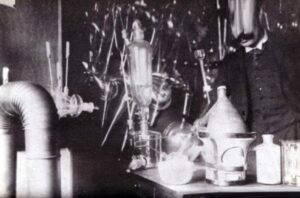 In the fall of 1925, publisher Jean Schémit received a visit from a small man dressed as a pre-war bohemian, with a long Asterix-the-Gaul-style mustache.

The man wanted to talk about Gothic architecture, the “green argot” of its sculptural symbols, and how slang was a kind of punning code, which he called the “language of the birds.” A few weeks later, Schémit was introduced to him again as Jean-Julien Champagne, the illustrator of a proposed book by a mysterious alchemist called Fulcanelli.

Schémit thought that all three, the visitor, the author, and the illustrator, were the same man, Fulcanelli himself. Perhaps they were. This, such as it is, amounts to our most credible Fulcanelli sighting. As such, it sums up the entire problem posed by the question: Who was Fulcanelli?

Beyond this ambiguous encounter, he exists as words on a page and, in some occult circles, as a mythic alchemical immortal with the status, or identity, of a St. Germain. There were two things that everyone agreed upon concerning Fulcanelli—he was definitely a mind to be reckoned with, and he was a true enigma.

In 1926, a mysterious volume issued in a luxury edition of three hundred copies by a small Paris publishing firm known mostly for artistic reprints rocked the Parisian occult underworld.

Its title was Le Mystère des Cathédrales (The Mystery of the Cathedrals). Fulcanelli as the author, claimed that the great secret of alchemy, the queen of Western occult sciences, was plainly displayed on the walls of Paris’s own cathedral, Notre-Dame-de-Paris. 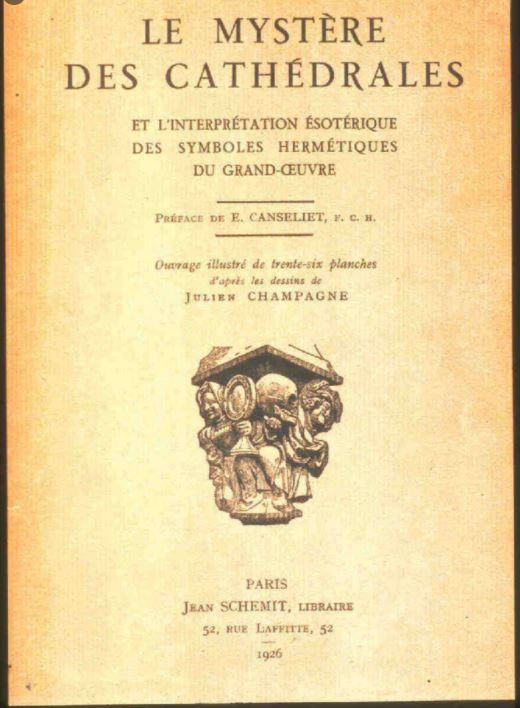 Fulcanelli was undoubtedly a French alchemist and esoteric author, whose identity is still debated, educated profoundly, and learned in the ways of alchemical lore, architecture, art, science, and languages.

Fulcanelli wrote two books that were published after his disappearance during 1926. He is a man who does not seem to exist, and yet he is re-created constantly in the imagination of every seeker—a perfect foil for projection.

When one turns to “Le Mystère”, one finds a witty intelligence that seems quite sure of the nature and importance of his information. This “Fulcanelli” knows something and is trying to communicate his knowledge; of this there can be no doubt.

To the occult savants of Paris in the late 1920s, Fulcanelli’s book was almost intoxicating. His student, Eugène Canseliet, informs us in the preface to the first edition of Le Mystère that Fulcanelli had accomplished the Great Work and then disappeared from the world.

“For a long time now the author of this book has not been among us,” Canseliet wrote, and he was lamented by a group of “unknown brothers who hoped to obtain from him the solution to the mysterious Verbum dimissum (missing word).

Meeting in Paris with Jacques Bergier

Walter Lang reports that Fulcanelli communicated with Jacques Bergier to warn French atomic physicist André Helbronner of man’s impending use of nuclear weapons. According to Fulcanelli, nuclear weapons had been used before, by and against humanity. Prof. Helbronner and Chevillon, among others, were assassinated by the Gestapo towards the end of World War II.

The meeting between Jacques Bergier and Fulcanelli reportedly occurred during June 1937 in a laboratory of the Gas Board in Paris. According to Neil Powell, the following is a translation of the original verbatim transcript of the rendezvous:

“You’re on the brink of success, as indeed are several others of our scientists today. Please, allow me. Be very very careful. I warn you… The liberation of nuclear power is easier than you think and the radioactivity artificially produced can poison the atmosphere of our planet in a very short time: a few years.

“Moreover, atomic explosives can be produced from a few grains of metal powerful enough to destroy whole cities. I’m telling you this for a fact: the alchemists have known it for a very long time… I shall not attempt to prove to you what I’m now going to say but I ask you to repeat it to Mr. Helbronner: certain geometrical arrangements of highly purified materials are enough to release atomic forces without having recourse to either electricity or vacuum techniques…

“The secret of alchemy is this: there is a way of manipulating matter and energy so as to produce what modern scientists call ‘a field of force’. The field acts on the observer and puts him in a privileged position vis-à-vis the universe. From this position he has access to the realities which are ordinarily hidden from us by time and space, matter and energy. This is what we call the Great Work.”

When Bergier asked Fulcanelli about the Philosopher’s Stone, the alchemist answered: “…the vital thing is not the transmutation of metals but that of the experimenter himself. It is an ancient secret that a few people rediscover each century. Unfortunately, only a handful are successful…”

In December 1938, the German chemists Otto Hahn and Fritz Strassmann sent a manuscript to Naturwissenschaften reporting they had detected the element barium after bombarding uranium with neutrons. Lise Meitner and her nephew Otto Robert Frisch correctly interpreted these results as being nuclear fission.

But who was Fulcanelli?

Mystification about the true identity of the alchemist obscured the fact that credible people had seen his visiting card, emblazoned with an aristocratic signature.

It was possible to encounter people at the Chat Noir nightclub in Paris who claimed to have met Fulcanelli right through World War II. Between 1926 and 1929, his legend grew, fueled by café gossip and a few articles and reviews in obscure Parisian occult journals.

According to Canseliet, his last encounter with Fulcanelli happened during 1953 (years after his disappearance), when he went to Spain and there was taken to a castle high in the mountains for a rendezvous with his former master.

Canseliet had known Fulcanelli as an old man in his 80s but now the Master had grown younger: he was a man in his 50s. The reunion was brief and Fulcanelli once again disappeared not leaving any trace of his whereabouts.

Learning more about Fulcanelli’s life is virtually impossible. He was born in the late 19th century and his works were published in the early half of the 20th century. He wrote about a wife in his notes, so he was presumably heterosexual and married.

The assumption is often made that Fulcanelli, whoever he was, was well educated. This is based on the merit of his writing and his ability to write in numerous languages, including his native French, as well as Latin and Greek. However, that is just speculation. He may have simply been well-read.

The fact is that we have no evidence of his schooling, his marriage or really even his ability to write well. He could have hired someone, no matter how doubtful that scenario may be. When people say Fulcanelli was a mystery, they mean it.