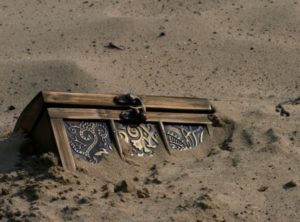 The treasure of Johnny Lang and his death in a desert snow storm is a fading legend of Joshua Tree National Monument’s mining era. Speculation still runs high that the gold Johnny Lang skimmed from the Lost Horse Mine is buried somewhere in the Park, possibly in the Lost Horse area.

If Lang’s gold ever is found, it will become the property of the United States government, as it is buried on Monument land. Bill Keys, who still remembers Lang and his gold, is the last survivor of mining in the monument still resides there.

Closely associated with the historical characters who once roamed the high desert, Keys himself was a successful miner and prospector. Although Johnny Lang carried the exact location of his gold cache to his grave, Keys remembers enough of Lang’s activities to piece together an approximate location.

Lang himself was a strange man. The son of wealthy parents, he was educated in St. Louis and could have led a cultured life there. Instead, he came west and adopted the rough habits of a desert miner.

During the 1890s, Lang bought out a miner named “Dutch Frank” Diebolt who had a rich claim south of the present Ryan Mountain. Johnny Lang figures in every version of the mine’s discovery, the common factor being that the legendary prospector found the mine while in pursuit of his wandering horse.

In one version, Lang, while looking for his horse, had sat on a rock to dislodge a stone from his shoe when he looked down and saw the dull yellow of gold. A group of cattle-rustlers – the infamous McHaney Brothers among them – discovered Lang in their vicinity. 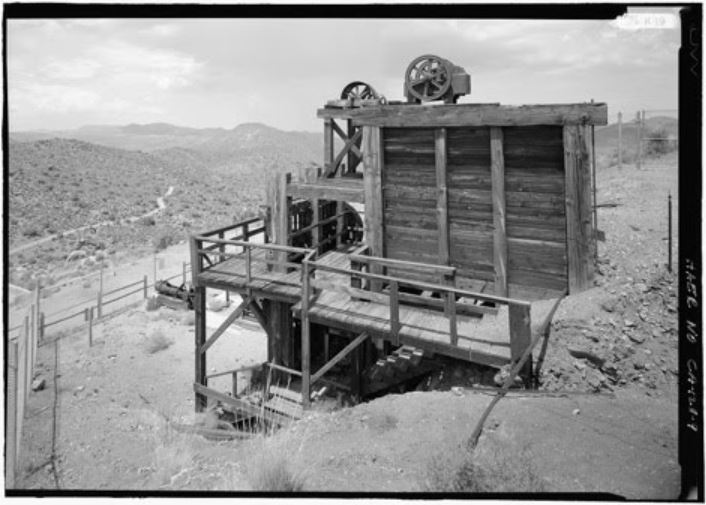 They threatened him off. Another version holds that Lang found his straying animal, which was later taken at gun point. After Lang had footed it back to camp, he was encouraged to look for gold “in them thar hills.” He found the Lost Horse strike, naming the mine after his long-gone companion.

The likeliest version, which Lang himself recounted to Bill Keys, holds that the miner stopped by the McHaney’s encampment near Keys’ Desert Queen Ranch and discovered that the gang had “confiscated” his missing horse.

The cowboy gang directed Lang to “Dutch Frank” Diebolt’s camp where Diebolt revealed that he had discovered a large gold strike but had been unable to claim it because of interference from the McHaneys. Lang purchased the claim rights from Diebolt for one thousand dollars, and he took on partners with enough clout to move on it. Eventually, Lang’s partners sold off their shares to the Ryan brothers.

After talking it over with another partner named Ryan, the pair named the mine The Lost Horse. Immediately they established a small headquarters with a crude mill to process ore. The adobe building still stands near Ryan campgrounds on the west side of Ryan Mountain.

It is on private property. As the partners prospered, they bought a giant 10-stamp mill from a Chicago foundry and had it hauled to the main mine site and erected over the shaft. It was this mill and the increased gold production it made possible that brought Lang to grief with his partner.

The pair decided to operate two shifts at the mill. Lang took the night shift and Ryan brother took the day crew. Gradually it became apparent that the day shift was turning out more raw amalgam than Lang’s crew. The amalgam is a mixture of mercury and gold from which the pure gold is later separated – was commonly used to mine the raw ore.

The mercury could be reused and the gold was formed into bricks. At first, it was explained by the difficulty of working at night, but as each day the production differences between the two crews increased, Ryan decided it was a matter of theft and the only solution was to get rid of Lang. This he accomplished by buying out Lang and ordering him off the property.

The Lost Horse Mine continued producing until 1905, when the miners hit a fault line and forever lost the ore-bearing vein. The mine was leased to others or left dormant until 1931, when rising gold prices prompted the processing of 600 tons of tailings (unprocessed chunks of leftover ore) with cyanide, producing a few hundred ounces of gold.

During one of the mine’s dormant phases, Lang returned to the shuttered buildings to collect his stolen amalgam. Subsequent attempts to find another bonanza had met with little success, but now this didn’t worry him. He had enough raw gold in secret caches at the Lost Horse Mine to support himself for the rest of his life.

Treks to recover portions of this horde began in 1917. Disposing of the melted bullion presented a problem at first, but that was solved by Bill Keys, who operated his own mine at the time and was always in the market for raw bullion. Lang started taking bullion to Keys twice a year; the same amount each time—about $980 worth. Keys estimates that Lang sold him close to $18,000 worth of gold between 1917 and 1926. It was during this latter year that greed finally got the best of Lang.

During January, a particularly cold month that year, Lang decided to pay a visit to his cache, even though at the time he was suffering with a cold. On his return home, a violent storm forced him to camp in the open desert. Weakened by his sickness and the cold weather, he fought death for several days before falling prey to it in his bed roll.

When Lang didn’t reappear, three of his friends organized a search and found his body beside the trail. They dug a grave on the spot and buried the old prospector as they had found him, wrapped in his canvas sleeping bag. The men, Frank Riler, Jeff Peeden and Keys, were certain that Lang had several hundred dollars worth of amalgam in his pockets, but didn’t disturb it.

Lang’s death strangely paralleled that of his father, who also died in a snow storm, but in Alaska. Both men had money in their pockets at the time of death and both had been warned against making the trip because of weather conditions.

As a tribute to his old friend, and to prevent the grave from becoming lost, Keys returned a few years later and carved a stone monument with the date of Lang’s death and the names of the men who discovered him. The spot is about three miles south of Cap Rock, on the right side of the road going to Salton View.

No one is sure how much of Lang’s gold still lies hidden at the Lost Horse Mine, but Keys has a few clues that might help someone locate it some day. Lang buried his amalgam at night near the cabin in which he lived.

He placed a lump of amalgam in a clay crucible, put a rock over the mouth of the crucible, then buried it within sight of his cabin.

The cabins used at the mine around the turn of the century have long since disappeared and only the main stamp mill with one hammer poised in mid-motion and a few donkey engines are left. Below the main shaft and tower, only two clapboard buildings remain, so it is now impossible to determine where Lang had his cabin. A metal detector could narrow the search, but it would still be difficult to locate Johnny Lang’s amalgam horde.

The road leading to the Lost Horse is about 100 feet south of Lang’s grave. It cuts to the left and is easy to follow in an ordinary passenger car for the first mile. After that, only pickups with heavy-duty tires, 4-wheelers, or hikers should try to reach the mine.

From the Salton View road, the mine is about seven miles. Because of its relatively high altitude, it is generally cooler at the Lost Horse, which makes it a pleasant place to visit even in hot weather. In the early 1990’s, however, heavy rains caused several of the park’s mine shafts to cave in. Many hoped that Lang’s treasure would be unearthed. It was never found.

While Johnny Lang’s treasure may never be found, its story is an exciting part of the mining adventures of the high desert.