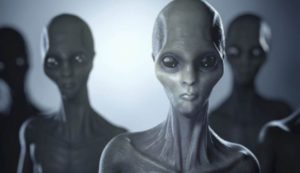 At present, there are two contradictory issues surrounding the existence of aliens that are seemingly increasingly at odds with each other.

On the one hand, our every attempt to survey the stars in the hopes of finding alien life is turning up absolutely nothing.

There doesn’t seem to be any organic life on Mars that we haven’t accidentally put there ourselves, and we haven’t yet got a response from any of our needy broadcasts out into the cosmos in the hopes of finding intelligent beings somewhere beyond our own world.

On the other hand, many people are convinced that UFOs are genuinely the work of advanced alien races that frequently visit the Earth. This belief is so strong among some of the world’s most powerful people that the US government has been investigating its own version of The X-Files for several years now.

So if there are intelligent aliens out there, why haven’t seen even the slightest evidence of their existence?

The so-called “Zoo Theory” hopes to explain this, and the logic is pretty much what you’d expect from its title.

MIT radio astronomer John A Ball has proposed the theory that the planet Earth is a kind of nature preserve, overseen by caretaker aliens who keep us from making contact with anyone else in the universe.

Ball has even written a paper documenting his theory, claiming that occasionally spotted UFOs are in fact the signs of Extraterrestrial intelligence (ETI) aliens, who slip up every now and then in their goal of observing, but never interfering, with our species’ social order.

“Why are we unaware of ETI? A premise of most searches is that ETI are trying to communicate with us, but we are not quite clever enough to see or hear them. I suggest, instead, that if ETI had chosen to announce their presence to us, we would be aware. Since we are not, I presume they have not,” Ball explains in the paper.

This is a relatively common idea in science fiction; the notion that humanity is just a little bit too stupid or uncivilized to be welcomed into the intergalactic community.

In Star Trek, Vulcans make first contact with humans after our species proves capable of creating warp-drive technology, while in Mass Effect, it’s only after humanity advances enough to stumble into an accidental war with the Turians that anyone on the galactic stage starts paying us any attention.

If Ball’s theory is correct, all alien species are really going out of their way to remain hidden, to the point that they must be carefully cloaking their entire civilizations at all times in fear of being spotted by us.

We’re getting better at spotting distant objects throughout the universe, so you have to assume that if an alien race exists close enough to be able to reach our planet, we’d also be able to spot their home colonies as well.

It’s possible that aliens exist trapped under layers of ice that keep them hidden, or that they only exist around the equators of planets which makes them harder to spot, but there’s really not enough evidence to assume that UFOs are proof of alien visitations when we can’t even be sure that there are other sentient species living anywhere in the Milky Way galaxy.

The idea that we’re alone is very scary to a lot of people—perhaps even scarier than the prospect of being visited periodically by mysterious aliens. It’s hard to handle the possibility that our civilization is the only one that’s ever been aware enough to observe the universe, in all its majesty, and that the knowledge that we’ve accrued will die with us.

That’s the scariest possibility of all; and one that theorists like John A Ball like to try to avoid thinking about—maybe, in all the grand, beautiful wonder of the cosmos, we really are just a random, rare accident that will never happen again.

Plus, if this is true, we can never live out our Captain Kirk fantasies of romancing beautiful green-skinned aliens, and that seems like a big let-down based on everything that science fiction has been promising us for the past 50 years.

After the Roswell UFO crash in 1947, the military searched for “child-sized coffins”