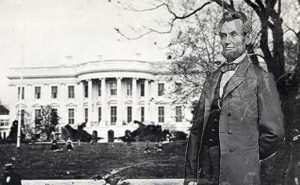 Rumors of White House hauntings date back more than 200 years. Among those ghosts, Abraham Lincoln is the most famous and allegedly seen the most often.

Is the most famous house in the United States haunted? Many believe so. Built in 1800, every president since John Adams has lived in The White House, and according to many politicians and White House staffers, some presidents refuse to leave.

“There is something about the house at night that you just feel like you are summoning up the spirits of all the people who have lived there and worked there and walked through the halls there,” former First Lady Hillary Rodham Clinton said on the Rosie O’Donnell show.

“It’s neat. It can be a little creepy. You know, they think there’s a ghost there. It is a big old house, and when the lights are out it is dark and quiet and any movement at all catches your attention.”

Abraham Lincoln is perhaps the most famous and often seen of these alleged ghostly residents. After he was assassinated in 1865, Lincoln began appearing to White House workers and guests as early as 1889, according to legend.

It is believed that a member of President Benjamin Harrison’s staff first spotted Lincoln. The staff member was so frightened by Lincoln’s presence that he performed a séance asking the late president to leave him alone so he could go about his work.

The séance must have worked for a time because no one reported seeing Lincoln again until Theodore Roosevelt took office. This time, Lincoln allegedly appeared to Roosevelt himself.

“I think of Lincoln, shambling, homely, with his sad, strong, deeply furrowed face, all of the time. I see him in different rooms and in different halls,” Roosevelt wrote during his presidency.

Regardless of Roosevelt’s meaning, even Cohen concedes that First Lady Grace Coolidge may have seen Lincoln during her husband Calvin Coolidge’s presidency in the 1920s. According to the first lady, Lincoln was looking out the window of the Oval Office when she saw him.

“(Lincoln was) dressed in black, with a stole draped over his shoulders to ward off the drafts and chills of Washington’s night air,” Grace Coolidge write.

Abraham Lincoln in the Rose Room

Lincoln again appeared during Franklin D. Roosevelt’s presidency, when a White House staff member saw Lincoln pulling on his boots in the Rose Room, according to legend.

During World War II, it is said that Lincoln appeared to Queen Wilhelmina of the Netherlands in the very same room. Queen Wilhelmina claimed that, while staying in the Rose Room, she heard a knock on the door and rose to answer it. When she opened the door and found Lincoln standing there she promptly fainted, according to legend.

British Prime Minister Winston Churchill also claimed to have a meeting with Lincoln while staying in the Rose Room. According to Churchill, after taking a bath he walked into the room naked and saw Lincoln leaning against the fireplace. The two made eye contact, and after an embarrassing second, Lincoln’s apparition began to dissolve, legend says.

Why Would Abraham Lincoln Haunt The White House?

The answer to why Lincoln may be hanging around lies within his own life. During his presidency, Lincoln’s son, Willie, died in the Green Room of The White House.

After Willie’s death, Lincoln and his wife, Mary Todd, held many séances to try to contact their son. There also is evidence that Mary Todd Lincoln tried to contact her husband shortly after his assassination, according to Cohen.

Some historians believe that Lincoln has stayed in The White House because he is looking for Willie. Others believe he was trapped during the séance with his wife. And still others are unsure as to whether Lincoln’s ghost even exists within The White House walls.

We may not ever know for certain if The White House is haunted, but recent residents such as George W. Bush’s daughter Jenna Bush Hager and First Lady Michelle Obama also have reported strange sounds and feelings within the White House walls.

Are the stories true, or are they a part of The White House mystique? We may never know.