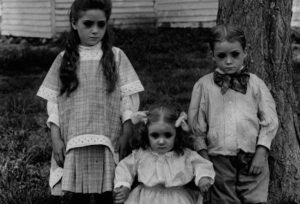 For many years, there have been lots of stories reported to have seen or heard strange behavior, related to the paranormal. From UFO’s and alien encounters to ghouls and ghostly activity, many people spend their lives searching for answers to the unknown.

Particularly in the last few years, a phenomenon becoming increasingly common is that of the Black Eyed Kids or BEK’s. It was first formally reported back in 1998, when two children approached a journalist named Brian Bethel while he was in his car, asking him for a lift as they explained they had no money for the bus to get home.

The boys’ eyes were described to be completely black, lacking any whites of the eyes, the cornea or iris but otherwise appearing normal with olive type skin. Many other people, who have encountered these so called Black Eyed Kids, describe them in a similar way. In most cases, the children are aged between 8 and 13 with olive skin, but deep black eyes, often described as deep polished coal.

However, the most alarming thing reported about the encounters with Black Eyed Kids is the strange ‘aura’ around them. They often coldly demand to enter your home or vehicle. They are reported to ask for a lift, to use the toilet or perhaps the telephone.

This in itself is obviously quite strange – the fact that a couple of children so young are out approaching strangers so late in the evening. But the most unusual thing appears to be the way they request to enter your home. It has been said that Black Eyed Kids are a mortal threat to all humans who encounter them. They are feared to consume the souls of humans, but only by the invitation to enter your home or vehicle.

When approached by Black Eyed Kids, the response is known to feel quite ‘hypnotic’, described in such a way that feels as if they have in some way control over your mind, yet it feels hard to draw yourself away.

Brian Bethel described the feeling as a whole body response, unable to put into words the feeling. Brian eventually managed to get away without agreeing to give the two young boys a lift though. What followed was then the first formal report of Black Eyed Kids on the 16th January 1998.

It was in the mid to late 90’s that reports of Black Eyed Kids had begun to appear in online forums and such like. Discussions around the subject are varied, and it has always been debated as to the origin of these ‘abnormal’ children.

Californian ophthalmologists have ruled out any health problems or abnormalities with the eyes or vision, and therefore theories have been developed as to the cause of the Black Eyed appearance in these children.

Many women who have reported alien encounters – and have alleged to have been impregnated whilst being abducted – suggest that the children are a result of a human and alien hybrid. Other people believe that these kids are in fact alien beings, disguised in this way.

There may never be an answer to the questions surrounding Black Eyed Kids, in the same way people still search for answers to alien encounters and UFO’s. However reports have grown increasingly of encounters with these children, and it has now become a worrying issue for many people, particularly as there seems to be no clear explanation.

Their approach seems to be what is most peculiar. It seems to be an almost forceful request, yet in an unchildlike manner. So the question that people ask is “are these creatures even children?” Many people describe the look in their eyes as pure evil, and absolute darkness and are horrified and shaken. Reports also suggest that it is an indiscernible feeling, and one that these people hope to not experience again, yet will never forget.

Over the years many horror films have attempted to portray reports of ghosts, ghouls and monsters or aliens in a fictional way. In recent years, many film directors have used the modern mystery of the Black Eyed Children to create films surrounding this phenomenon.

The Haunting of the Sunshine Girl and the hunt for BEK’s is a most recent film depicting the Black Eyed Kids. It is a documentary type film looking at the strange behavior around these children, and the feelings that surround them.

As this is a relatively modern mystery, there isn’t much research as yet, however there are many online discussions related to Black Eyed Kids, and people’s encounters. It is certainly a strange phenomenon and one which I’m sure most people would not wish to experience.

The big question is “What would happen if these kids came tapping at your window or door, asking to enter your home….and you let them in?”

One theory suggests that they are alien beings sent to clean up the planet, and not in an eco-friendly sort of way. Could this be the end of life as we know it? How would we even know if our souls were consumed by these Black Eyed Kids? One thing for sure, is it certainly won’t be long before we find out…