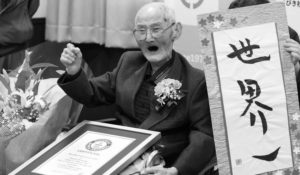 112-year-old Titaco Watanabe from Japanese Prefecture of Niigata died less than two weeks after receiving the testimony of the oldest man in the world from Guinness World Records.

The organization and the funeral home, which deals with his case, confirmed that an elderly Niigata resident passed away on Sunday.

After receiving a certificate from Guinness World Records on February 12, a 112-year-old man stopped eating. According to relatives, the man could not eat, had a fever, and it became difficult to breathe for a few days before his death.

Watanabe was born on March 5, 1907 in the city of Yoetsu in Niigata Prefecture. He graduated from an agricultural college and worked as a clerk for many years, and after retiring he worked in the garden and grew miniature bonsai trees.

He believed that the secret of longevity in the ability to rejoice and avoid stress.