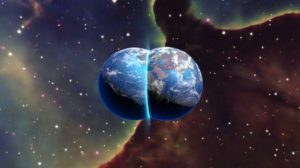 It seems that scientists find more and more evidence to prove the existence of parallel worlds. Physicists at Stanford University managed to calculate the hypothetical number of universes that were formed as a result of the Big Bang. According to them, the Big Bang created 101016 universes.

It is quite possible, though, that they may exist inside one another, including our planet. Therefore, there is probably another Earth hidden inside planet Earth.

The hollow Earth theory can be traced back to ancient periods of the history of human civilization. Ancient wise men believed that there was a whole underground world with its underground creatures living inside the planet. It may seem to many that it is only a primeval and naïve perception of the structure of the world.

In Ancient Greece, there was a myth about Tartar – the ominous underground world. Philosopher Anaxagoras (5th century A.D) built a model of creation made of the flat earth surrounded by the air sphere and the cloud of ether.

He wrote about the existence of the parallel world with its people, cities and even celestial bodies. If planet Earth is the center of the universe, where do these people live? Do they live under the ground?

Hypotheses about the existence of hollow space inside planet Earth appeared later as well. The theory was put forward by Galilei, Franklin and Lichtenberg among others.

In 1818, John Cleves Symmes showered the US Congress, universities and prominent scientists with messages, in which he was trying to prove that the Earth was made of several concentric spheres with openings near the poles.

Soviet academician V. Obruchev put forward a hypothesis about a giant meteorite that rammed into Earth in primeval times. According to him, the meteorite may have broken through the planet’s crust and created hollowness inside.

US researcher Cyrus Teed said that the surface of the Earth might be the interior shell of a sphere. The theory became known as “concave hollow Earth” hypothesis. According to this theory, we all live on the inner shell of the Earth.

Let’s just assume that the underground world exists and that there is someone living there in that world. What may those creatures look like? Can they be the aliens, ghosts or mysterious monsters, the existence or non-existence of which has been perplexing mankind for centuries?