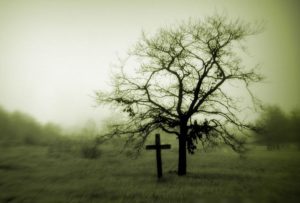 Montgomery is nominally a town although, in reality, it has more of a village feel to it. Its parish church, which is dedicated to St Nicholas, boasts some impressive tombs within and a small cross outside, on which a simple inscription identifies it as “The Robber’s Grave”.

It marks the burial place of John Davies, a melancholy, grief-haunted man whose past was shrouded in mystery, but who in 1819 became the steward of the run-down farm owned by the widow Morris and her daughter, Jane.

Thanks to his dedication, the fortunes of the business were soon reversed. But the sudden success angered a local man, Thomas Pearce, who had hoped to benefit from the widow’s misfortune by acquiring the property at a bargain price.

Davies’ hard work had thwarted his ambitions and, as the resentment boiled within him, fortune intervened to seal the fate of the steward.

Davies’ hard work had earned him the respect of young Jane Morris. That respect soon turned to affection, and she abandoned her fiance, Robert Parker, in favor of John Davies. Furious at the slight, Parker turned to Pearce and the two men agreed that it would be in both their interests if they were rid of the troublesome steward for good.

Parker and Pearce duly carried out a violent robbery, leaving behind evidence implicating John Davies, who found himself charged with highway robbery. At his trial, he was found guilty and sentenced to death. No sooner had the noose been placed around his neck than a fearful storm erupted. Rolls of thunder shook the town to its foundations.

Lightning streaked across the sky, its bright flashes illuminating the rain-sodden face of the condemned man, whose voice rose above the tempest as he turned to address the terror-stricken crowd shouting:

“If I am innocent, the grass, for one generation at least, will not cover my grave”.

As the trap fell he spat a curse upon the two men whose evil machinations had brought him to his death, and called upon them to appear before god to account for their actions.

Parker died soon afterward, killed in a blasting accident. Pearce fared little better as he ‘wasted away from the earth’.

John Davies was buried in the simple grave where, as he had prophesied, no grass grew for many years. Even today, bare patches can still be seen upon it, and there is a belief that harm will befall anyone who attempts to tend the Robber’s Grave.