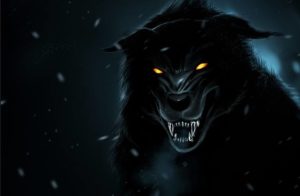 The story of The Thing On Cameron Street comes from Linda Godfrey’s excellent book “Real Wolfmen, True Encounters In Modern America.” Godfrey is well-known for her work dealing with Wisconsin’s most famous cryptid, The Beast of Bray Road.

While no one knows what the Beast of Bray Road really is, it is most often believed to be a physical creature. The Thing On Cameron Street, while sharing a very similar appearance with the Bray Road Beast, seems to be more of a phantom beast.

Cameron Street is located in the Northern Wisconsin town of Eau Claire, an area with no shortage of paranormal strangeness. The report received by Godfrey occurred in 2003. A man renting an apartment from a friend woke at about 2:30 pm.

The man noticed nothing unusual and went to use the bathroom. It was when he exited the bathroom that things got very strange. As he walked out the door he was confronted by an over 6 ft tall wolf headed nightmare.

The thing was all black, its skin appeared wet or oily and it had no visible hair. Its wolf like head had yellow eyes, fangs and pointed ears. The man also noted the thing had sharp claws, a well muscled body and appeared to weigh about 300 lbs.

The terrified man, who said that he thought the thing was going to kill him, reached for a baseball bat. Just then the wolf thing turned its head to the side and vanished.

Perhaps it was just a waking hallucination.

5 years later another man, unknown to the first had a similar encounter. The second man also lived near Cameron Street but his wolf creature appeared outside of his home. The man walked out of his home near dusk and saw a creature identical to the one reported 5 years earlier.

It was standing between the mans truck and garage. It moved about quickly, reminding the man of a Ninja. Then it simply vanished and was never seen again.

Whatever the two Eau Claire men saw, it does point to the interesting possibility that reports of The Bray Road Beast, Bigfoot, giant birds and countless other bizarre creatures may not be physical creatures at all.

Unfortunately, if that is the case it doesn’t bring us any closer to understanding what they really are.