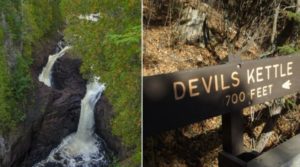 Devil’s Kettle is a puzzling geological phenomenon located on the North Shore of Lake Superior. As the Brule River makes it way toward the lake, it gets split in two by a rocky knob located just above the falls.

While the east half tumbles down 50 feet in normal waterfall fashion and continues toward the lake, the west half disappears in a very large pothole and is never seen again. Where does the water go? No one seems to know.

It’s a heck of a lot of water (not to mention trees, rocks, and boulders) to just vanish into the ground. There’s been speculation that the underground river ends up somewhere along the shore of Lake Superior (about 1.5 miles away), but it has never been determined where exactly.

One theory has the river following a large fault located somewhere in the lower bedrock. But this is unlikely since it would have to be extremely large to allow for so much water to flow through it.

It would also have to be precisely oriented toward the lake. And there’s never been any evidence of such a fault found in the area.

Another theory is that a lava tube formed a billion years ago when the rocks first solidified. Lava tubes can be found in Hawaii where fresh basalt is created by the islands’ volcanoes. The problem with this theory, according to geologist John C. Green, is that the rock at Devil’s Kettle waterfalls isn’t basalt – it’s rhyolite, and lava tubes never form in rhyolite. 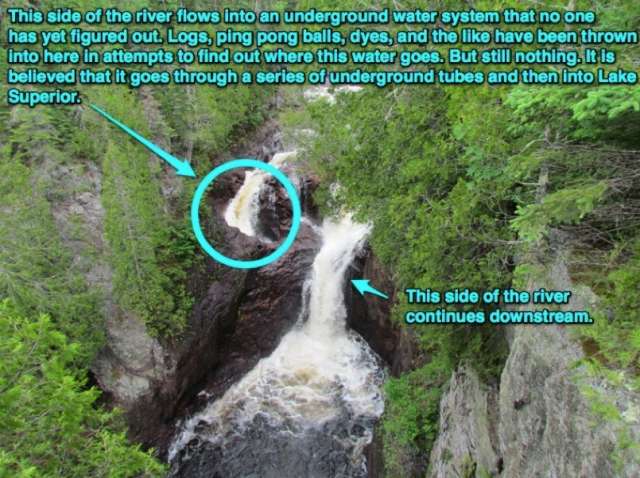 But maybe it’s a hidden lava tube located in a layer of basalt directly beneath the rhyolite. After all, geologists have determined that the rocks in that particular region alternate between layers of rhyolites and layers of basalts.

Maybe the swirling rock-filled glacial water that formed the pothole at the end of an ice age cut down beyond the rhyolite and into an ancient lava tube. That could have happened right? Well, not likely. For one thing the basalts found in the area aren’t the kind in which lava tubes would form.

North Shore basalts were flood basalts that spread out on the surface like pancake batter poured onto a griddle. But even if it were the correct kind, the nearest basalt layer to Devil’s Kettle is located much too far underground to be any kind of factor in the mystery.

So where does it all that water go? Over the years, people have tried to figure it out by throwing logs, colored dyes, and even ping-pong balls into Devil’s Kettle in hopes of seeing signs of them show up along the lakeshore. But none ever has, and where it all ends up remains a mystery.

One story claims someone pushed a car into the cauldron, but to get a car to the site and be able to dump it into the kettle from above looked nearly impossible.

Anyway, if you want to go see this remarkable geological conundrum for yourself, Devil’s Kettle is located in Judge C. R. Magney State Park about fifteen miles beyond Grand Marais on Highway 61. To get to the falls you have to walk in about 1-1.5 mile from the park entrance, including climbing down (and up, on the way back) about 200 wooden steps.

But the trek is well worth the effort. The park closes for the season at the end of October so if you have a chance this month you should check it out. Who knows – maybe once you see Devil’s Kettle for yourself, you’ll be the one to figure out where all that water goes.