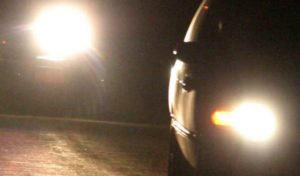 A short time before Christmas in 2002, when the evenings draw in quickly and the cold air nips at the flesh of the living, a police switchboard was lit up by a number of calls from concerned motorists traveling along the A3 at a place called Burpham, near Guildford in Surrey.

It turned out that a group of them had witnessed a car with its headlights on leave the road abruptly and plunge down a steep, overgrown embankment.

Officers were immediately dispatched to investigate what sounded like an everyday accident, but were stumped when they could find no sign of the vehicle in question. There were no tire marks on the road nor was there any flattened foliage or smashed branches that might have given away the location of a car’s passage.

When dawn broke the following morning, a more in-depth search was undertaken and it was then that the police found what seemed to be the vehicle in question, however, not all was at it should have been, for the officers uncovered not just the wreckage of a crashed car, but also a grisly mystery.

Twenty metres from where the motorists’ reports had said it had veered off the road, there lay a dark red Vauxhall Astra. It was nose down in a ditch and almost obscured entirely by trees and brambles—more or less invisible to users of the road above.

Although the switches indicated that they had been left on at the time of the crash (as suggested by the witness reports), the headlights were now off thanks to a drained battery. Not too far away from the car lay the unfortunate driver—he was very much deceased.

It seemed as though he had survived the crash, but then expired as he tried to drag himself up the embankment in an attempt to get help. But here’s the mysterious part—the driver was already totally decomposed. He was barely more than a skeleton. How could this be, when a multitude of witnesses saw the accident only the evening before?

The driver was identified from his dental records as Christopher Brian Chandler, a 21-year-old (or so), from Isleworth in West London.

At the time of his death, Chandler was wanted by the police for his part in an alleged robbery and was last seen in Hounslow before being reported as missing by his brother David in the July of 2002. It’s unclear what had brought him to this part of Surrey.

A police spokesman said at the time: “We believe the car left the road and ended up in the ditch during July. It doesn’t appear that any other vehicles were involved. The car was discovered as a result of a report from members of the public who thought they saw a car’s headlights veering off the road.”

Had the motorists that saw a car swerve off the road and plough into the undergrowth actually seen some kind of spectral re-enactment of the original accident? We might never find out. “One officer who was involved in finding the car and the five-month-old corpse said it was ‘spine chilling’.”