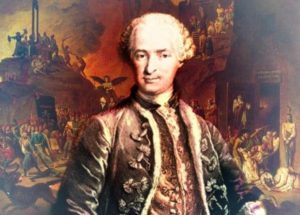 The Count of Saint Germain was a prominent figure in European high society in the mid 1700s. This controversial figure was regarded by many of his peers as the keenest of philosophers and ridiculed by others as charlatan.

What is generally agreed on by occultist is that The Count of Saint Germain was a master of secret mystical sciences.

He seemed to be a man who could do absolutely anything. His talents, résumé, and mysterious wealth garnered him much attention. Even many notable figures of 18th century Europe, like Louis XV were impressed and praised him for his intelligence.

At the same time, quite a few found him strange, egotistical, and accused him of being a swindler. Casanova later described him as having “a manifold of eccentricities” and dismissed him as a “celebrated and learned impostor.”

Saint-Germain traveled extensively throughout Europe for 40 years — and in all that time never seemed to age. Those who met him were impressed by his many abilities and peculiarities:

– He was an accomplished painter.

– Wherever he traveled, he set up an elaborate laboratory, presumably for his alchemy work.

– He seemed to be a man of great wealth but was not known to have any bank accounts. (If it was due to his ability to transmute base metals into gold, he never performed the feat for observers.)

– He dined often with friends because he enjoyed their company, but was rarely seen to eat food in public. He subsisted, it was said, on a diet of oatmeal.

– He prescribed recipes for the removal of facial wrinkles and for dyeing hair.

– He loved jewels, and much of his clothing — including his shoes — were studded with them.

– He had perfected a technique for painting jewels.

– He claimed to be able to fuse several small diamonds into one large one. He also said he could make pearls grow to incredible sizes.

– He has been linked to several secret societies, including the Rosicrucians, Freemasons, Society of Asiatic Brothers, the Knights of Light, the Illuminati and Order of the Templars.

The origin of The Count of Saint Germain is somewhat uncertain. Historians generally place his birth around 1712, but other more specific facts are few. Depending on what you read, he was the child of an Italian tax collector, the offspring of Portuguese royalty, the illegitimate son of a Transylvanian prince, or simply appeared out of nowhere. 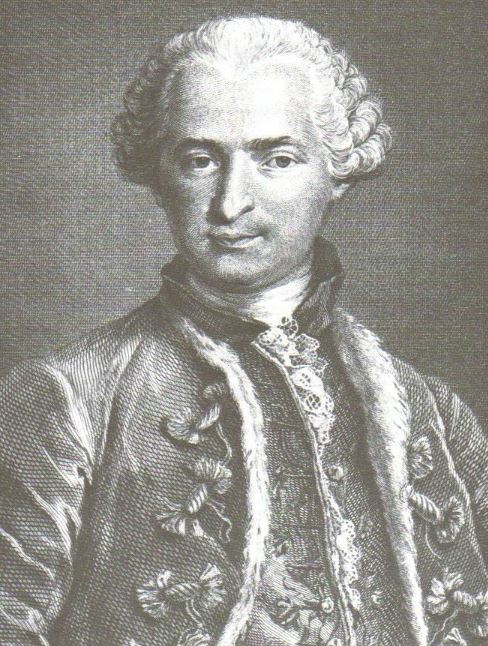 The most probable explanation of his origin came from Annie Besant. She believed that Prince Racozi II of Transylvania was indeed The Count of Saint Germain’s father. All of Racozi’s children were to be looked after by the emperor of Austria.

However, documents reveal that one was withdrawn from his care and raised by descendants of the Medici family in Italy. Besant also believes that the Count of Saint Germain took his name from San Germano, a town where his father owned estates.

There is much more information about his adult years. However, this information does nothing but piles on more mysteries. In fact, many claim he simply arrived on the scene of France in the 1700s as a full grown man of 40-50 and that his appearance remained that way for decades — maybe even centuries to come.

To add to this oddity, there were also several claims that he did not eat. He was quite the socialite and sat at the tables of many to discuss matters, but had never addressed a dish.

While the Count of Saint Germain never claimed to be older than he appeared, he never denied it either. This caused much gossip and many interesting stories of his possible immortality, the three most popular being:

There are those that suggest Count Saint Germain was a time traveler and could bend time at will. They site as evidence the appearance of individuals spanning centuries claiming to be the Count. All of these individuals had no verifiable past, were of youthful appearance, and kept company with the social elite of their time.

Among the time bending abilities claimed where the abilities to suspend or halt time and move from one time period to another at will. It was also said that he stopped time for himself whenever he was asleep.

Some assumed he originated from the time of Christ. He was thought to be among the men that taunted Jesus during the events that led to his crucifixion, cursed to walk the earth until the Second Coming.

Alternatively, some believe he wasn’t cursed and simply became an Ascended Master, or godly being sent to earth as an assistant to humanity.

An Elixir of Life

During this time, a “science” that dealt with obtaining special powers and the transmutation of several metals, called Alchemy, become popular. The Count of Saint Germain showed a deep interest in its studies and often boasted about his success in creating gems.

Some parts of Alchemy deal with rejuvenation or preservation, so many concluded that he had produced an elixir of life. Some have mentioned that he frequently drank a special tea when out in public.

Gossip of his alleged immortality may have been the primary focus of the attention he garnered, but his other talents also drew their share of attention. He was a highly skilled painter, often noted for his ability to perfectly render gems.

He was a talented musician, with great skill on the piano and violin. He even composed a few pieces and worked with the likes of Tchaikovsky. He was a designer of felt hats, a skilled jeweler, and fluent in many languages from French to Chinese.

The Count of Saint Germaine also showed an interest in politics, popping up at many important points in political history. He worked as spy for the French court and became a close adviser to Louis XV.

While unsuccessful, he even took part in the negotiation of a peace treaty between France and Austria. Some paintings suggest that the Count of Saint Germain may have spent some time as a Russian general, with Alexis Orloff deeming him as “a man who played an important part in our revolution.”

During the time of Louis XVI, he also spoke with Marie Antoinette, predicting the fall of the monarchy and the death of Jean-Frédéric Phélypeaux .

For any ordinary mortal, that would be the end of the story. But not for Count de Saint-Germain. He would continue to be seen throughout the 19th century and into the 20th century.

In 1785 he was seen in Germany with Anton Mesmer, the pioneer hypnotist. (Some claim that it was Saint-Germain who gave Mesmer the basic ideas for hypnotism and personal magnetism.)
Official records of Freemasonry show that they chose Saint-Germain as their representative for a convention in 1785.

After the taking of the Bastille in the French Revolution in 1789, the Comtesse d’Adhémar said she had a lengthy conversation with Count de Saint-Germain. He allegedly told her of France’s immediate future, as if he knew what was to come. In 1821, she wrote:

“I have seen Saint-Germain again, each time to my amazement. I saw him when the queen [Antoinette] was murdered, on the 18th of Brumaire, on the day following the death of the Duke d’Enghien, in January, 1815, and on the eve of the murder of the Duke de Berry.”

After 1821, Saint-Germain may have taken on another identity. In his memoirs, Albert Vandam wrote of meeting a man who bore a striking resemblance to Count de Saint-Germain, but who went by the name of Major Fraser. Vandam wrote:

“He called himself Major Fraser, lived alone and never alluded to his family. Moreover he was lavish with money, though the source of his fortune remained a mystery to everyone. He possessed a marvelous knowledge of all the countries in Europe at all periods. His memory was absolutely incredible and, curiously enough, he often gave his hearers to understand that he had acquired his learning elsewhere than from books. Many is the time he has told me, with a strange smile, that he was certain he had known Nero, had spoken with Dante, and so on.”

Major Fraser disappeared without a trace.

Between 1880 and 1900, Saint-Germain’s name once again became prominent when members of the Theosophical Society, including famed mystic Helena Blavatsky, claimed that he was still alive and working toward the “spiritual development of the West.”

So who was Count Saint-Germain? Some thought him a charlatan, while others considered him a visionary who continues to walk among us. The fascinating thing about the Count of Saint Germain is that his story never really dies. Who, or what, he truly was may never be known.