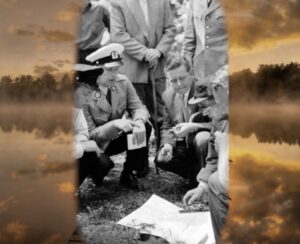 Early in the morning of June 5, 1960 four teenagers (Maila Irmeli Björklund (15), Anja Tuulikki Mäki(15) and their eighteen-year-old boyfriends, Seppo Antero Boisman and Nils Wilhelm Gustafsson) had been camping on the lake’s shores near the town of Espoo.

Sometime between 4:00 a.m. and 6:00 a.m. (EET) during the early morning hours of Sunday, June 5, 1960, Mäki, Björklund and Boisman were all stabbed and bludgeoned to death by an unknown assailant.

Gustafsson, the only survivor of the massacre had fractured facial bones which appeared to confirm his story. He stated afterwards that he had seen a glimpse of an attacker clothed in black with bright red eyes coming for them. 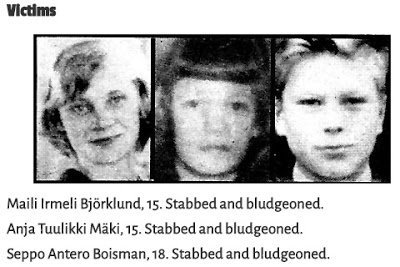 No murder weapons were retrieved from the site, though some of victims’ belongings were missing.

Björklund, Gustafsson’s girlfriend, was found undressed from the waist down and was lying on top of the tent, and had suffered the most injuries out of all of the victims. She was stabbed multiple times after her death, whilst the other two teenagers were slain with less brutality. Gustafsson was also found lying on the top of the tent

At about 6:00 AM, a number of boys birdwatching some distance away had reportedly seen the tent collapsed and a blonde man walking away from the murder scene. The bodies of the victims were discovered at about 11:00 AM by a carpenter named Risto Sirén.

Upon his discovery of the bodies, he subsequently alerted the police, who arrived on the scene at noon.

Based on police investigation, the killer had not injured the victims from inside the tent, but instead had attacked the occupants from outside with a knife and an unidentified blunt instrument (possibly a rock) through the sides of the tent.

At that time, Nils Wilhelm Gustafsson said he could not remember what had happened. Despite bloodstained shoe-prints at and leading away from the scene of the crime matching the soles of Gustafsson’s footwear (found hundreds of meters away) he was seemingly not considered a prime person of interest for the original investigation.

After the Lake Bodom murders there were a number of suspects including Pauli Luoma, a runaway from a local work department. Luoma was later cleared of the murders after his alibi was confirmed. Pentti Soininen was also a suspect for the crime.

Soininen already convicted of a number of violent crimes as well as property crimes, allegedly admitted to committing the murders while in prison. There was an amount of skepticism about Soininen’s guilt but truth would never actually be known since he hanged himself at a prisoner transport station in 1969.

Many local people suspected Karl Valdemar Gyllström, a kiosk keeper from Oittaa known to have expressed annoyance at campers. Police found no hard evidence to link him to the actual murders.

They were skeptical of supposed confessions he was said to have made because they considered him disturbed. He drowned in Lake Bodom in 1969. None of the suspects in the multiple murder case were ever convicted.

In late March 2004 the Lake Bodom murder case took another turn. Nils Wilhelm Gustafsson, the only survivor, was arrested under suspicion of murdering his friends.

The prosecution attempted to bolster their case with identification by two birdwatchers of Gustafsson as the man they observed at the scene on the crime. According to the official statement, Gustafsson erupted in jealous anger over his feelings for Björklund, his new girlfriend.

She was stabbed multiple times after the fatal blow, while the two other teenagers were killed less savagely, however, a year later, in 2005 the court rejected the prosecution’s case and acquitted Mr. Gustafsson and the case remains unsolved.

The murders shocked the nation, yet despite the intense police investigation the case remains unsolved to this day.