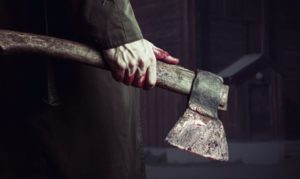 Clementine Barnabet is believed to have been born around 1894 in St. Martinsville, Louisiana to Raymond Barnabet and Nina Porter. She also had one brother named Zepherin. Barnabet’s father reportedly abused his family, which moved to Lafayette in 1909.

At age 17, Barnabet joined a cult called the Church of Sacrifice which prompted the start of the murders that she committed. The killings occurred between Lafayette and Texas.

Barnabet’s first murder occurred in February 1911, the victims being Walter and Sylvania Byers and their infant child. Barnabet’s killings followed a consistent pattern: she would often murder entire families rather than one person, using an axe for butchering her victims and cutting off their heads.

Once she had butchered the entire family, Barnabet would then lay their bodies in bed together and leave them to be found as such.

The bodies were arranged together in the blood-drenched bed of the parents, left in a twisted and horrific display for the police. The brutality and ritualistic nature of the murders suggested this was not simply a robbery gone wrong.

The community’s hysteria reached a boiling point, and as the killings continued, the community lived in constant terror. More than 150 people met in the Town Hall at the Good Hope Baptist Church to try to extinguish the fear, and people were urged to sleep with guns at the ready.

There was no way to guess who would be next, or who the killer or killers were … neighbors looked at neighbors and wondered if they were staring at the killer.

In the ensuing investigation, the authorities’ first suspect was Barnabet’s father Raymond.

The Barnabet family testified against Raymond by recounting him leaving town that night for unknown reasons and returning home late with blood and brain matter on his shoes and shirt. Zepherin stated that when he returned home, Raymond was bragging about the murders that he had committed and said that the victims deserved it.

While Raymond Barnabet was awaiting trial, another familicide took place. In November 1911, Norbert and Asima Randall and their four children were murdered in a manner similar to the previous slayings. This led authorities to consider another suspect. The police then decided to investigate Clementine Barnabet.

In the Barnabet residence, a man’s suit covered with blood and brain matter was found in Clementine Barnabet’s closet. This prompted police to arrest Barnabet as a prime suspect, along with her father, of the numerous murders committed in the area.

When initially arrested, Clementine denied all connections to the murders. However, eventually Barnabet confessed to 35 murders. 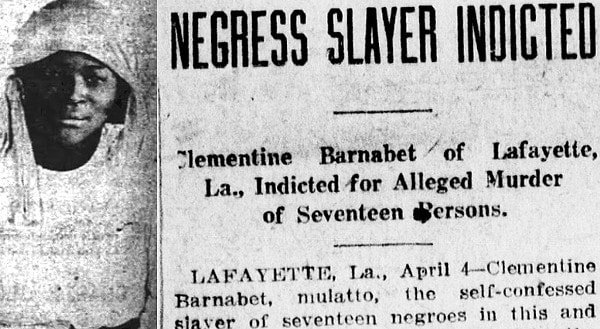 Clementine and her father were members of the Voodoo cult called The Church of Sacrifice, along with three others who founded the Human Five. As Clementine revealed the truth, she smiled ruthlessly, gleefully detailing her crimes and the crimes of her gang of accomplices.

She would dress like a man to be less conspicuous at night and travel between cities by train to carry out the murders, but she also explained her connection to the Church of Sacrifice, an offshoot of a Christ’s Sanctified Holy Church congregation in Lake Charles, Louisiana.

Clementine claimed that a priestess of the Church of Sacrifice had given her and her friends “conjure bags” that would grant them supernatural powers and make them undetectable to the authorities. This spurred Barnabet into committing her first murder to test whether or not this was true.

The motivation for killings? Immortality. Clementine and the other members of The Church of Sacrifice thought that killing such sinners would lead them to eternal life, and that since they were doing the “good work,” they were protected.

At only 18 years old, in October 1912, Clementine Barnabet was sentenced to life in prison at Angola State Penitentiary. In July 1913, she tried to escape jail but was caught. Later jail doctors operated on her brain as a result of a return to normal condition; due to good behavior, she was released from prison after just ten years.

In August 1923, Barnabet walked out of prison, after which no knowledge exists on her whereabouts.