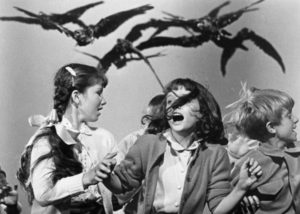 Many people when they see lots of birds together, inevitably comes to mind memories of the memorable genius Alfred Hitchcock film “The Birds”, but if fiction that tells the movie was based on a true story?

The master of suspense Alfred Hitchcock filmed in 1963 one of his most memorable films, “The Birds”, which would be in our minds to use as a threatening, at first sight something so tender and fragile as a bird.

Until recently it was believed that the source of inspiration that Hitchcock was a story used the same name in 1952, whose authors are the famous British novelist Daphne du Maurier (1907-1989), but apparently the great Alfred was aware of a strange event that only two years before his famous film, occurred in California.

On Friday August 18, 1961, the American media reported that hundreds of gulls had “gone mad”, and were rushing to the people as real kamikazes, pecking furiously everything that was in his way, even breaking windows and invading homes in the area dela Monterey Bay, south of San Francisco, creating great confusion and fear in the area and forcing the authorities recommend refuge in homes and protect windows in an attack that lasted all night.

The next morning, the area seemed strewn with the bodies of gulls to the amazement of locals, some of them wounded by bites, scratches or cuts from broken glass.

On hearing the news, Hitchcock phoned from his home in Scott Valley, near the area of ​​the incident, the local newspaper and asked them a copy of what happened, saying he would use it as material for his next film, now we all know to be “The Birds”.

The newspapers at first attributed attack on a strange fog that disoriented the birds, but people who witnessed the aggressiveness of the birds did not think ever that version.

And indeed they have taken almost 50 years for an explanation to this strange event, and that only a few weeks ago, scientists dela Estatalde Louisiana University published in the scientific journal “Nature Geoscience”, the attack of birds was caused by a nerve toxin that poisoned and became aggressive even suicide.