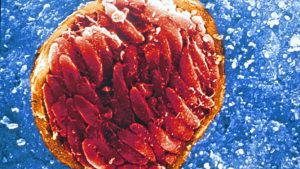 Recent research shows that as many as 40% of the population can be infected with toxoplasmosis, a type of brain parasite that can affect a person’s behavior.

According to John Webster, professor of epidemiology at the Imperial College of London, brain parasites are isolated and protected from the immune system. However, you should be aware that they can affect people’s behavior.

Toxoplasmosis is common in domestic cats. According to the estimates of the aforementioned scientist, approximately 350,000 British people are infected with the parasite every year. Czech scientist Jaroslav Flegrei believes that toxoplasmosis also leads to depression and suicide.

The parasite comes in the form of microscopic cysts. Its presence was found in two areas of the brain responsible for fear and pleasure. Recent studies have shown that DNA toxoplasmosis includes two genes that increase dopamine secretion.

Mice infected with toxoplasmosis suddenly stopped responding to the smell of cat urine. Dopamine suppressed natural instincts. Scientists suggest that some unsafe car drivers may be carriers of a parasite that affects their driving style, making it more chaotic and dangerous.

The problem of toxoplasmosis did not appear yesterday and has been known to mankind for thousands of years. In fact, we have learned to live with these protozoa as well as 40% of the British population. The statistics in other countries are probably similar.

Now the most important thing seems to be a detailed understanding of how the toxoplasmosis is able to manipulate its host, and the aim of the research work should be to create an antidote. This can be very important, because many disease syndromes can exist precisely because of the presence of a nefarious parasite.