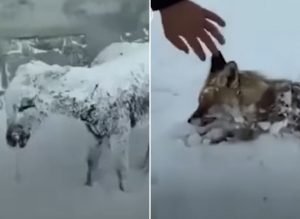 Apocalyptic spectacles are caused by an unusual cold front in Turkey.

Animals froze in place while standing, and sometimes while walking, due to a sharp drop in temperature, reports users on Twitter.

But some users have questioned the authenticity of this video. They raised doubts about how animals would freeze while standing. According to Misbar’s investigation, the claim is suspicious. There is no evidence or anything to support that the story is true.

Although it is not yet clear whether the video is real, according to aljazeera.com extreme cold is an unusual occurrence for the southern Mediterranean countries, but the second time that it has happened in two years.

The extreme weather caused major disruption to the Greek capital Athens, and forced the closure of Istanbul airport.

The rare snowstorm — called “Elpida” or “Hope” in Greek — brought the Greek capital Athens to a standstill.

“We ask citizens to avoid leaving their homes. It will be a difficult night,” Climate Change and Civil Protection Minister Christos Stylianides said.

“The height of the snow is unprecedented in some areas,” he added.

Hundreds of drivers in the city were stuck in their cars for hours with rescue workers braving the cold to free the stranded motorists.

Scientists cannot explain such a weather anomaly. Some suggest that this is due to climate change on the planet. But others put forward more dire hypotheses, one of which is the use of weather control weapons.

The limitations of the treaty, and its application only to signatory states, allow weather warfare to continue to play a role in warfare throughout the twenty-first century. The United States prohibits weather modification without permission of the United States Secretary of Commerce.