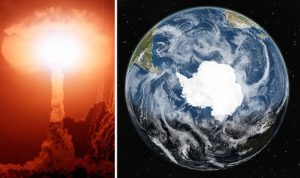 Scientists at Rutgers University, the National Center for Atmospheric Research and other research centers in the United States predicted that the large-scale use of nuclear weapons on Earth would not only cause the death of millions of people, but also lead to long-term climate change for up to 15 years.

This is reported in an article published in the Journal of Geophysical Research: Atmospheres.

It is believed that the use of nuclear weapons against large cities and industrial centers will cause catastrophic fires and soot emissions, which could lead to the so-called nuclear winter.

However, in the new work, scientists were the first to use a modern climate model that includes aerosol and nitric oxide emissions to uncover the effects of nuclear war on ozone and the amount of ultraviolet light reaching the surface.

The consequences of both a local nuclear conflict and a world war were assessed.

Scientists have found that nuclear weapons can permanently destroy the protective ozone layer, leading to several years of extremely strong ultraviolet radiation, which, in turn, will endanger human health and damage food.

For example, in the event of a regional nuclear conflict between India and Pakistan, five megatons of soot will be generated and the intensity of ultraviolet radiation will increase during the year.

In the event of a conflict between Russia and the United States, 150 megatons will be generated, and the intensity of ultraviolet radiation will increase in eight years, when the atmosphere becomes more transparent.

Due to global nuclear war, stratospheric heating and other factors will reduce the ozone layer by 15 years, with peak losses of 75 percent globally and 65 percent in tropical regions.

In the event of a regional nuclear war, ozone will be reduced by 25 percent and recovery will take 12 years.

According to scientists, the results indicate that the consequences of a nuclear war will be worse than previously thought. An increase in the intensity of ultraviolet radiation will lead to an increase in the frequency of mutations in DNA, which will negatively affect agriculture, and in humans and animals, the incidence of cancer and cataracts will increase.