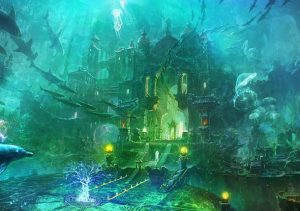 Did Atlantis exist, or was it merely a fantasy conjured up by Plato, and kept alive through wishful thinking over the centuries? If it did exist, where can we find it’s remains?

We can ask other questions. For instance, just what WAS Atlantis? How did it disappear? In this essay I will be examining just a few such theories, and seeing where realistic ideas end and fantasy begins.

One popular assertion from Plato is that Atlantis was ‘beyond the Pillars of Hercules’. These are almost unanimously thought to be the outcrops either side of the Strait of Gibraltar. The mythology of the Straits of Glbraltar is neat and explanatory. Geographically speaking, they represent a narrow stretch of water separating the Mediterranean Sea from the Atlantic Ocean. And mystically, they separate the known world from the unknown.

To the north and south of the Straits are two large promontories – the Rock of Gibraltar in Europe and the Abyla on the African coast. These are the pillars separating the narrow strait. But according to legend the two promontories were much closer. Indeed, they were a closed gate. Until, that is, the mighty Hercules stood by the rocks and pushed them apart, thus allowing the waters to flood in.

The ancient Greeks were great colonisers, founding many Mediterranean cities which exist to this day. And bearing this adventurousness in mind, we can see the myth of Hercules separating the straits as a desire of the ancient Greeks to learn more, shedding light on what is dark; a noble pursuit that was later to find additional expression in their great philosophers, of which Plato was one of the greatest exponents. In this sense, Atlantis can, therefore, be seen in a place where our knowledge is ‘dark’, rather than physically beyond.

And it is, perhaps, in the same magnificent spirit that Atlantis rose to popular consciousness in the 19th century, during a similar time of great expansion and colonisation. This was the time of the great European empire building, and the time when America first expressed its wish to be a superpower, going on to eclipse Europe.

We can here see why some people would be eager to realise the existence of a great lost civilisation, divorced from all the other races on Earth. And to this we must also add the publication, in 1859, of Charles Darwins ‘Origin of Species’. With God in decline, a new theory of human origins was abroad – that we had evolved through natural selection, and western society was its higherst expression.

Such an idea infused Victorian society in the 19th century. With the Industrial Revolution well advanced and the European empires coming very much into being, the Victorians saw themselves as the apex of the evolutionary story. And with such sentiments, it is not difficult to see the inspiration for the literal profusion of ideas concerning Atlantis. The American and the western European was retracing the greatness that existed in the deep, dark past?

Due to this popular awareness, when Ignatius Donnelly published his ‘Atlantis: The Antediluvian World’ in 1882, it created immense interest. Donnelly, an American Congressman, created many of the controversies and views concerning Atlantis that survive to this day. Principle among these was his idea that at one time Atlantis existed in the middle of the Atlantic Ocean, until its destruction in a cataclysm.

Positing an earthquake as the most likely reason for its destruction, to Donnelly, Atlantis had acted as a form of bridge between cultures either side of the Atlantic, the island itself being the primary source of those cultures.

Donnelly found evidence for this idea wherever he looked. For instance, throughout the Atlantic there are small islands which are, infact, the tips of undersea mountains. To Donnelly these are all that is left of the mountains that used to be above sea level, forming part of the Atlantis homeland.

Similarly, evidence of his idea of Atlantis as the primary source of culture could be seen throughout the ancient world, in the similarities of cultures, architecture, writing skills and other achievements from the Incas to the ancient Egyptians. He also posited the idea that the sudden appearance of these cultures could only be explained by the sudden disappearance of their mother culture.

Ignatius Donnelly was one of the first modern pseudo-scholars. Mocked and derided by most serious researchers, they are often believeable and always popular. In Donnelly’s case, his persuasive writing went on to prompt British Prime Minister Gladstone to attempt to get Parliament to fund a ship to trace the sunken coastline of Atlantis.

Today, we know that much of Donnelly’s evidence was untrue. But this should not be used as an excuse to ignore pseudoscholarship in its entirely.

For instance, the list of great pseudo-scholars of the past include Charles Darwin (a lifelong amateur), Gregor Mendel (the discoverer of genetics and a monk), and the great Sir Isaac Newton himself; his real search was not so much scientific, but to find the ‘great spirit of the universe’.

Of course, not all pseudoscholars are as successful as this trio. Indeed, many of them do write absolute hogwash. You may even decide that I fit this last category. But at worst, such writers at least fuel the experts to define more completely, and at best, they can begin entirely new sciences.

Donnelly began an Atlantian tradition of speculation, deep theory and occasional lunacy, which continues to this day.
One principal writer in this vein was Scottish newspaper editor and editor of ‘The Atlantis Quarterly’, Lewis Spence. After writing studies of the mythologies of Egypt, Babylon and the early Americas, in the 1920s he turned his attention to Atlantis, which he decided had covered most of the Atlantic Ocean in the Miocene period, ending ten million years ago. At this point it disintegrated into smaller islands and, from 25,000 to 10,000 years ago, disappeared completely.

Studying the Atlantic coast of Europe, Spence decided that the early humans such as Cro-Magnon Man had actually migrated from the western side of Atlantis, near the Americas. Only in this way can we see Cro-Magnon Man as the real invader he was, going on to wipe out Europe’s indigenous Neanderthal Man.

Taking his evidence from a wide variety of sources, including archeology, anthropology, geology and mythology, much of this is totally discredited, but this did not stop the speculation, sometimes coming from scientists themselves.

One such scientist was Austrian physicist Otto Muck. Opting for the Azores as the location of the destroyed Atlantis, he argued that in 8500BC the sunken continent was lost when a large asteroid struck the Charleston coast of North America.
Some most unusual evidence of something strange about the Azores did, infact, surface in 1898, when a telegraph company used grappling equipment to mend a broken Transatlantic cable 500 miles north of the Azores.

French geologist Pierce Termier was sent samples from rocks brought up from the sea bed. Identifying them as basaltic lava, they did however show evidence of volcanic activity ABOVE sea level in the recent geological past.

No real evidence has been found to link an asteroid collision to the destruction of a large Atlantic island, but this has not stopped some amazing disaster scenarios to irritate scientists.

Typical was Austrian engineer Hans Hoerbiger. Fascinated, by astronomy and mythology, he put mythologies of a malevolent Moon down to the fact that Earth had been struck by the Moon in the past.

However, this was not our present Moon. This, Hoerbiger, was convinced, was just a ball of ice. But in the past, Earth had had a second Moon, a captured comet, which caused a great flood and other disasters when it exploded.

Many Atlantis theorists have associated this much discredited disaster scenario with the destruction of Atlantis. And the same can be said for the ideas of psychoanalyst, Emmanuel Velikovsky.

Fascinated by Sigmund Freud’s idea that Moses was also the Egyptian pharaoh Akhnaton (a pharaoh who briefly introduced into Egypt the idea of a single God), Velikovsky became intrigued by early mythologies.

In particular, the disasters such as the Flood arrested his attention. In 1680 a comet had approached Earth, and the scientist W Whiston had put forward the idea that on a previous encounter this comet had caused the Biblical Flood.

Velikovsky tended to agree with this idea, and went on to formulate a cosmology in which a comet had several times approached Earth, causing all Biblical disasters, and accounting for the destruction of Atlantis, before finally settling down to become the planet Venus.

Of course, none of these ideas can now be backed up by real science. For instance, the Moon is not made of ice, Venus is a definite planet. But in the world of Atlantian speculation, anything goes. But my central point here would be, and why not? For instance, academia must always be challenged, otherwise all we will ever have for knowledge is consensus, and consensus can cripple knowledge.

Similarly, archaeology has made many advances in their techniques due to their need to disprove certain pseudoscholars. So if for no other reason than this, pseudoscholarship, and Atlantology in particular, has a valid role.

But most importantly, Atlantis makes us expand our minds – gives us the idea that knowledge is not complete. It keeps alive the thirst to inquire – an inquiry that led to the ideas and ideals of the modern world in the first place.
Whether theory or fantasy, Atlantis remains one of the central symbols of the thinking mind.