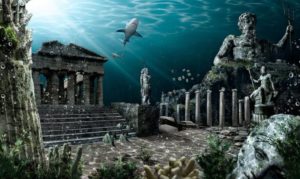 A continent the size of Europe, boasting beautiful cities, advanced technology and utopian government… subjected to a great cataclysm and reduced to rubble that sank beneath the sea, lost forever.

The legend of Atlantis has been around for thousands of years, and whatever its factual validity may be, it can truthfully claim a noble heritage: its earliest proponent was Plato.

The Greek philosopher wrote of Atlantis in two of his dialogues, “Timaeus” and “Critias,” around 370 B.C. Plato explained that this story, which he claimed to be true, came from then-200-year-old records of the Greek ruler Solon, who heard of Atlantis from an Egyptian priest.

Plato said that the continent lay in the Atlantic Ocean near the Straits of Gibraltar until its destruction 10,000 years previous.

In “Timaeus,” Plato described Atlantis as a prosperous nation out to expand its domain: “Now in this island of Atlantis there was a great and wonderful empire which had rule over the whole island and several others, and over parts of the continent,” he wrote, “and, furthermore, the men of Atlantis had subjected the parts of Libya within the columns of Heracles as far as Egypt, and of Europe as far as Tyrrhenia.”

Plato goes on to tell how the Atlanteans made a grave mistake by seeking to conquer Greece. They could not withstand the Greeks’ military might, and following their defeat, a natural disaster sealed their fate. 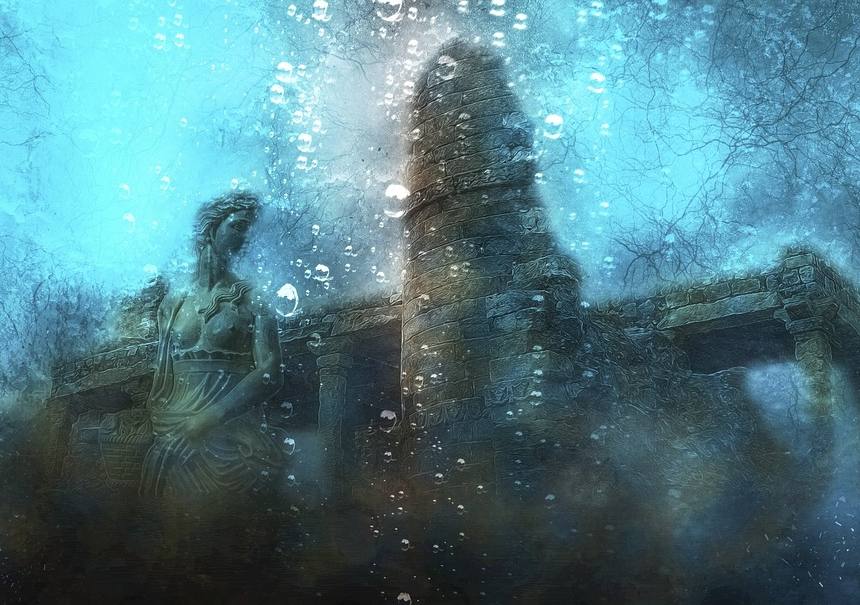 “Timaeus” continues: “But afterwards there occurred violent earthquakes and floods; and in a single day and night of misfortune all your warlike men in a body sank into the earth, and the island of Atlantis in like manner disappeared in the depths of the sea.”

Interestingly, Plato tells a more metaphysical version of the Atlantis story in “Critias.” There he describes the lost continent as the kingdom of Poseidon, the god of the sea.

This Atlantis was a noble, sophisticated society that reigned in peace for centuries, until its people became complacent and greedy. Angered by their fall from grace, Zeus chose to punish them by destroying Atlantis.

Although Plato was the first to use the term “Atlantis,” there are antecedents to the legend. There is an Egyptian legend which Solon probably heard while traveling in Egypt, and was passed down to Plato years later.

The island nation of Keftiu, home of one of the four pillars that held up the sky, was said to be a glorious advanced civilization which was destroyed and sank beneath the ocean.

More significantly, there is another Atlantis-like story that was closer to Plato’s world, in terms of time and geography… and it is based in fact.

The Minoan Civilization was a great and peaceful culture based on the island of Crete, which reigned as long ago as 2200 B.C. The Minoan island of Santorini, later known as Thera, was home to a huge volcano.

In 1470 B.C., it erupted with a force estimated to be greater than Krakatoa, obliterating everything on Santorini’s surface. The resulting earthquakes and tsunamis devastated the rest of the Minoan Civilization, whose remnants were easily conquered by Greek forces.

Perhaps Santorini was the “real” Atlantis. Some have argued against this idea, noting Plato specified that Atlantis sank 10,000 years ago, but the Minoan disaster had taken place only 1,000 years earlier.

Still, it could be that translation errors over the centuries altered what Plato really wrote, or maybe he was intentionally blurring the historical facts to suit his purposes. And there exists yet another strong possibility: that Plato entirely made Atlantis up himself.

Regardless, his story of the sunken continent went on to captivate the generations that followed. Other Greek thinkers, such as Aristotle and Pliny, disputed the existence of Atlantis, while Plutarch and Herodotus wrote of it as historical fact. Atlantis became entrenched in folklore all around the world, charted on ocean maps and sought by explorers.

In 1882, Ignatius Donnelly, a U.S. congressman from Minnesota, brought the legend into the American consciousness with his book, Atlantis: The Antediluvian World. In more recent years, the psychic Edgar Cayce (1877-1945) became the U.S.’s most prominent advocate of a factual Atlantis.

Widely known as “The Sleeping Prophet,” Cayce claimed the ability to see the future and to communicate with long-dead spirits from the past. He identified hundreds of people — including himself — as reincarnated Atlanteans.

Cayce said that Atlantis had been situated near the Bermuda island of Bimini. He believed that Atlanteans possessed remarkable technologies, including supremely powerful “fire-crystals” which they harnessed for energy.

A disaster in which the fire-crystals went out of control was responsible for Atlantis’s sinking, he said, in what sounds very much like a cautionary fable on the dangers of nuclear power.

Remaining active beneath the ocean waves, damaged fire-crystals send out energy fields that interfere with passing ships and aircraft — which is how Cayce accounted for the Bermuda Triangle.

Cayce prophesied that part of Atlantis would rise again to the surface in “1968 or 1969.” It didn’t, and no one has yet found hard evidence that it was ever there. With sonar tracing and modern knowledge of plate tectonics, it appears impossible that a mid-Atlantic continent could have once existed.

Still, many argue that there must have been an Atlantis, because of the many cultural similarities on either side of the ocean which could not have developed independently, making Atlantis quite literally a “missing link” — the topographical equivalent of Bigfoot.

In more ways than one.

Mystery of the Ubaid Lizardmen: Are Ancient Artifacts Evidence Of Reptilians?