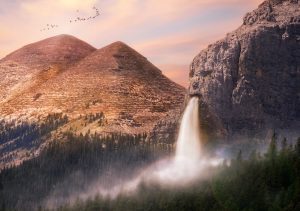 Just about anyone you ask has heard of Atlantis a continent many believe once existed in the Atlantic Ocean. Surprising few have heard of the lost continents Mu and Lemuria that some believe once existed in the Pacific Ocean. Like Atlantis these continents are believed to have sunk into the ocean and in the case of Mu this was believed to have occurred overnight.

Mu and Lemuria are now days used interchangeably but that was not always the case. The concept of Lemuria predates Mu. Lemuria is a Pre Plate Tectonic Theory used by Philip Sclater to reconcile the occurrence of Lemur fossils in Madagascar and India yet not in Africa or the Middle East.

Scalater proposed that there was once a vast continental land mass that bridge Madagascar and India. Scalater’s theory was not unusual for its time in 1864. Evolution was a new idea and plate tectonic theory was unknown.

Land bridges of various sizes were often postulated to explain how similar fossils could be separated by vast oceans. Lemuria in particular was used to explain the apparent absence of human forebears.

It was thought by some that these were beyond our reach under the Pacific Ocean. Remember at this time fossil evidence consisted of perhaps a pair of Neanderthal fossils. Now days the fossil finds in Africa and the acceptance of Plate Tectonic Theory which shows Madagascar and India where once joined has caused Lemuria to completely disappear from scientific consideration. 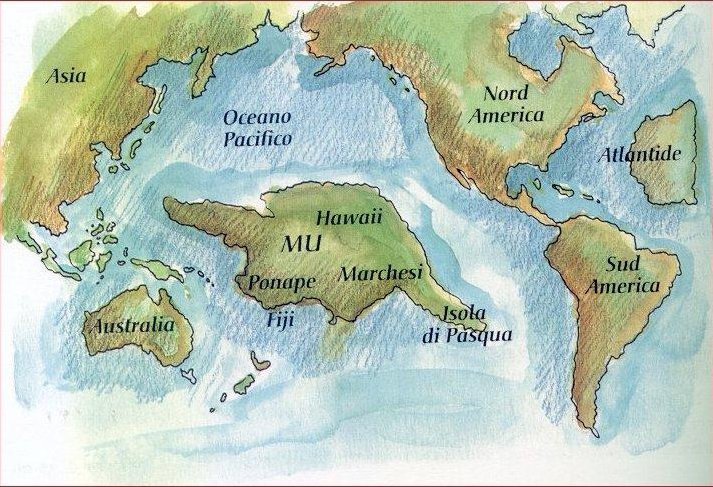 According to Blavatsky man evolved in seven stages or “Root Races” the first being purely spirit in form and the second purely physical. The third race combined the aspects of the first and resided on the continent of Lemuria.

The third root race was described as being about 7 feet tall, androgynous, laid eggs, simple minded, yet spiritually pure. Blavatsky revealed that in spite of their spiritual purity the Lemurians began to commit acts of bestiality. The gods, offended by these acts destroyed Lemuria by sinking it into the sea.

The first mention of Mu was by the 19th century writer and traveler Augustus Le Plongeon. He said that many ancient societies or civilizations were created by refugees from Mu. Some of these ancient civilizations include the Egyptians and the Mayans.

Augustus Le Plongeon also said that the continent sank overnight. His claims were based on his claimed translations of Mayan texts saying that “Queen Moo,” left this continent and established the civilization of Egypt.

James Churchward also made claims regarding a connection between Mu and the Mayans. He said as a soldier he traveled to India, and while he was there he learned a language which enabled him to read some ancient tablets, which he called the “Naga-Maya.” He said the tablets spoke of land called Mu located in the Pacific Ocean.

Churchward also said he translated the Niven Tablets, which he claims also spoke of Mu. The Niven Tablets are a set of pre-Columbian tablet discovered by William Niven in 1921 and have frequently been tied to several lost civilizations theories. Sadly the Niven Tablets have all been lost and nothing is left but rubbings of some of the tablet.

There are many more claims that can be listed for the existence of Mu but there is little point in covering them. They all share a theme of questionable evidence that can’t be verified to exist or if it does requires the wildest interpretation imaginable.

So is a lost continent located somewhere under the Pacific Ocean a possibility? The astonishing answer is yes. Mainstream science’s main objection to the existence of Mu or Lemuria, besides the occult considerations, is the speed with which they sunk. Plate Tectonics would require millions of years for such an event to happen. Not the overnight event as most Lost Continent Theories claim.

Zealandia is a submerged continent the scientific community recognizes. It is located in the Pacific Ocean and is quite large, half the size of Australia.

Presently New Zealand and New Caledonia are the largest area above water. Other lost continents, though much smaller, include Mauritia and the Kerguelen Plateau located in the Indian Ocean. While these may not be home to some long forgotten master race they are still pretty cool.