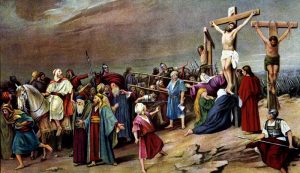 Billions of Christians believe Christ was crucified, buried, and then rose again. This is the basis for Christian faith.

What if Jesus survived the crucifixion? Would this be pure blasphemy, or is there reason behind this assumption?

Writer and researcher Michael Baigent, author of Holy Blood-Holy Grail, and other scholars believe that the gospels are suspect to the theory of the survival of Christ.

One can only find the figure of the Jesus of history by teasing out of various historical documents, some which are the New Testament.

In the theory of the survival of Jesus, there are a number of clues which help support it, but there are two major clues that are the strongest.

The first is in the crucifixion itself. When a person was crucified they did not die quickly, but rather a slow painful, morbid death which would have taken two to three days, possibly even a week. Jesus supposedly died within two to three hours.

Joseph of Arimethea went to Pilot and asked to have the body of Jesus, which was contrary to Roman law anyway, and when Pilot heard that Jesus was already dead, he was so surprised to hear that Jesus had died so quickly that he sent a centurion to check.

If Jesus did not die on the cross he would have been forced to flee the Holy Land.

If authorities discovered Jesus was still alive, he would have been punished again. So where would he have gone? There is a story of Christ’s life after the crucifixion.

That the blood relatives of Jesus may still live among us!

Rennes le Château is at the foot of the Peraniese Mountains in the South of France. This small town is at the center of a religious and historical cyclone. The story begins with a young Parish priest by the name of Bérenger Saunière.

Bérenger Saunière was first assigned to Rennes le Château in 1885 at the age of 33. He started renovations of the church and found a suspicious hallow piece in the altar when taking it apart. Within the hallow piece he found four parchments, which started the mystery.

Two of the parchments were written in code which he could not decipher.

Saunière took the parchments to Paris to seek help from experts in military code and ciphers. It is believed that he found the key to unlocking the mystery of the documents.

It is also believed that someone gave Saunière money to find out what information was obtained in the parchments or perhaps to keep the secrets of Rennes le Château from becoming public.

When Bérenger Saunière went home he started a full renovation of the church. He found new details within the church’s artwork that he thought to be clues to the information contained in the parchments.

Is it possible that the coded documents revealed to Bérenger Saunière that Christ had survived the crucifixion? In a depiction of stage fourteen of the cross (bellow), which is normally the body of Christ being carried to the tomb, Saunière showed the moon as already risen, thus Passover had already begun. 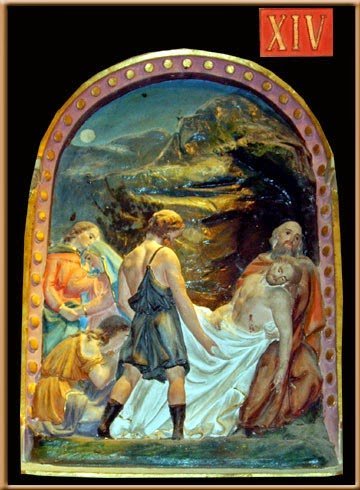 No Jew would handle a dead body after the beginning of Passover.

Either Saunière was showing that:

The body is not dead;
They were taking the body out of the tomb and not in;

After renovating the church, Saunière still had some money left over, so he continued in Rennes le Château and built a house, garden, and a tower which he named after Mary Magdala (Magdalene).

The figure of Mary Magdala may prove key to historical legends that Mary Magdala traveled to the South of France, in addition some scholars believe she may have been the wife of Jesus.

A number of documents spoke of relationships between Mary Magdala and Jesus which could only be described as close. For example, it was witnessed that Jesus kissed her often on the lips to the point where the other disciples complained, perhaps they felt jealous. Jesus was a religious teacher.

It was very unusual for a Jewish religious teacher to be unmarried, in fact a commandment of God was to be fruitful and multiply.

The question arose, what could possibly be so important about this relationship that would cause such a mystery?

Could the Holy Grail, the illusive treasure of legend and myth be the key to unlocking this mystery? It would seem unrelated to Jesus and Mary but may be the most important clue of all. The Holy Grail was thought of as the chalice Christ drank from at the Last Supper, and which may of held his blood after the crucifixion.

Could the Holy Grail have another meaning? A meaning hidden in the French words for Holy Grail:

During research historical proof was found that the line of David, Jesus’ blood line, existed in Europe during Medieval Times.

According to Bérenger Saunière when the knight finds the Grail, he does not find the golden chalice, but proof that Jesus survived the crucifixion.

In 1917 when Saunière was dying, he called for a priest to hear his confessions. When the priest did, he fled from the room in shock, never smiling again. Perhaps Saunière imparted in him a secret, a secret that has been suppressed for 2,000 years.