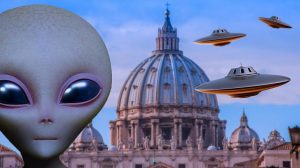 In 1600, Italian philosopher, mathematician and astronomer Giordano Bruno was killed by the Catholic Church in the inquisition for believing that the universe was infinite and that it would have many solar systems and many inhabited globes.

It was considered a heresy to think that the Earth wasn’t the centre of the universe and Giordano Bruno ended up burned with nails in the tongue never to blaspheme again.

However, four hundred years later, the same Vatican that condemned Giordano Bruno to the holy fire is now considering that the universe is just too big to humans, as said in the conference held in Rome that gathered astronomers, biologists and physicist to study the possibility of life in other planets.

The question that remains is: what will be the theological implications if the Vatican ever accepts the fact that there may be life in other planets?

The Impact of the Possibility of Extraterrestrial Life on Church

So how could aliens live under the same rules as humans if they don’t know Jesus? Jesus then, wouldn’t be a universal saviour, which seems too confusing for most Christians.

Other people claim that extraterrestrials are free from sins, therefore, they don’t need to be saved since they are living in accordance with God’s rules. Jesus came to save humans as humans are the sinners, some would say.

For José Gabriel Funes, the astronomer who directs the Vatican Observatory, the possibility of extraterrestrial life doesn’t contradict the Christian faith as aliens would have to be considered a part of God’s creation as well. In several interviews he said that it’s impossible to limit God’s freedom of creation.

No matter what interpretation prevails, the fact is that the Church is having to adapt to the scientific discoveries. After having to admit that Earth wasn’t the centre of the universe, it seems that once again the Church will have to recognize what is obvious to many other philosophies, that the universe is simply too vast to shelter only seven billion inhabitants.

Has the Vatican Always Known About Extraterrestrial Life?

There are groups of scholars spread in the universities of the world that advocate that the Vatican has always known about extraterrestrial life. The archives of Vatican are filled with references to aliens that date back to ancient times.

The Vatican also holds a large collection of images, sculptures and paintings that contain references to apparitions of UFOs and even indications of alien visitors in the past.

The documentary Secrets of Vatican, directed by Timothy Green Berckley, brings information about UFO sightings over the Vatican among other useful information that suggest that the Catholic Church knows much more about extraterrestrial that most people would imagine.

So, why would the Church hide this from humanity? There are plenty of books available that explain reasons behind it, including the controversial book by Eric Jon Phelps, Vatican Assassins: Wounded in the House of my Friends (Halycon Unified Services 2001), which talks about the political ambitions of Vatican and the truths hidden from the eyes of the public.