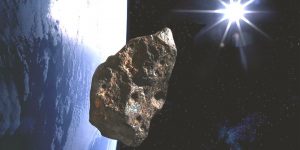 In December last year, NASA’s OSIRIS-Rex probe approached the Benn asteroid and began to study it. The goal of this project, which cost a billion dollars to US taxpayers, is to take soil samples from this celestial body.

It is clear that the conspiracy theorists immediately started talking about some other goals of such a mission, since the value of some cosmic pebbles and the fantastic cost of such an event do not fit the logic of an ordinary person.

These suspicions were soon confirmed by photographs of the asteroid Bennu, which NASA posted on its official website. Virtual archaeologists immediately found something strange on them, especially among the anomalies, a clearly distinguished artificial pyramid, as if copied from the Egyptian ones.

The assumption of independent researchers that now the NASA staff certainly will not post a single snapshot of the mysterious asteroid has been confirmed one hundred percent: since then, Bennu’s photos have not appeared on the Internet.

But quite interesting information has leaked out: the asteroid does not allow the American device OSIRIS-Rex to land, throwing clouds of dust into space (as if firing). NASA employees did not expect such activity from Bennu, who does not allow the probe to land on this small asteroid just 550 meters in diameter.

At the same time, the asteroid produced 11 emissions over the last month, which puzzled American scientists.

What caused such “shots” of dust, NASA employees cannot say, but for some reason Bennu is “hostile” against the uninvited guest. Maybe this is somehow connected with the true purpose for which the Americans conceived such an expensive project?