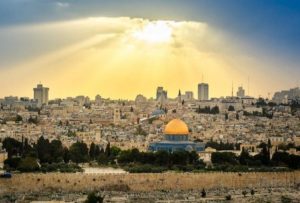 Every year in Israel’s Holy City, a handful of Christian tourists are suddenly transformed from seemingly healthy, normal people to street preaching, psalm-singing Bible characters often garbed in nothing more than a hotel bed sheet.

Psychiatrists have a name for this sudden onset of delusion, the Jerusalem Syndrome, which was first diagnosed by Dr. Heinz Herman in the 1930’s.

Those who are affected by the Jerusalem Syndrome begin vigorously bathing to purify themselves, dress in robes or sheets, and begin preaching in the streets believing they are Moses, John the Baptist, or Jesus Christ, among others, who were sent on a “divine mission”.

The Jerusalem Syndrome is usually benign; however, those affected by it have been known to cause trouble. Such was the case with Australian tourist Dennis Rohan in 1969.

Claiming to be on a mission from God, Rohan set fire to the Al Aqsa Mosque, which lead to citywide riots. Since this incident, doctors and law enforcement treat the bizarre behaviour of the Jerusalem Syndrome with caution.

As the year 2000 approached, the number of tourists anticipating the coming apocalypse grew drastically, leading to an increase of strange Biblical figures roaming the streets of Jerusalem. It was estimated that as many as 50 people a week would require hospitalization, a startling increase from an average of 20 each year.

Although the Jerusalem Syndrome affects many that have a history of psychiatric problems, many who experience the same delusions are sane, healthy and successful businessmen, teachers, and professionals.

Syndrome usually affects Protestant Christians, but it has also been reported in religious Jews and in rare cases, Catholics. Usually lasting about a week, most can be brought back to reality (with help) and have no memory of their short-lived Biblical persona.

The most obvious cause of the Jerusalem Syndrome is religious fanaticism. The fact that it only affects Christians and some Jews suggests that subjects are prone to feeling a desire to be “called of God” and may interpret impressions and feelings that they get from touring the city as an actual Godly summons.

One of the more controversial theories suggests that the Jerusalem Syndrome has been around before Christianity, and may have actually contributed to the founding of the religion.

This theory suggest that historical Bible figures such as John the Baptist, the apostles, and even Jesus Christ were affected by the syndrome. This, however, does not provide an explanation as to the origins of such phenomenon.