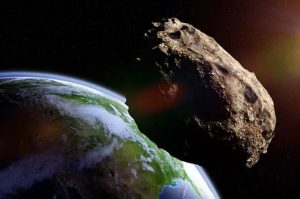 The Mount Lemmon Astronomical Observatory in Arizona, USA, has detected an asteroid with a high risk of impact with the Earth. It will approach the Earth in the summer of 2023.

Asteroid 2022 AE1, found on January 6 in a survey of the Mount Lemmon Astronomical Observatory in Arizona in the United States, according to scientists, has the highest risk of a collision with the Earth among all known near-Earth objects.

Data about the object are given on the website of the Center for the Study of Near-Earth Objects (CNEOS) of the Jet Propulsion Laboratory (JPL) NASA.

The size of the asteroid 2022 AE1 is comparable to the size of the hypothetical “Tunguska meteorite” – about 70 meters, which is equivalent to the height of a 23-story building.

The speed of movement of this cosmic body is 19.83 km / s. The visual magnitude of the brightness – 22V – is at the limit of the possibility of observation for large telescopes. The last week due to the full moon, the object is not visible at all.

Currently, the object has received one point on the Turin ten-point scale of danger emanating from a celestial object. One point is the limit of the norm. You should start to worry when the score is 4 points or higher.

A potential collision with the Earth is possible on July 4, 2023. Scientists estimate the probability of a collision at 1 in 1700.