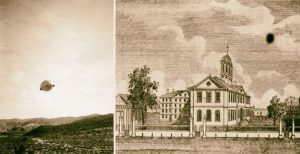 Although some people believe the UFO phenomenon started in the 1900s, there are a few well-preserved accounts speaking of extraterrestrial encounters ever since humanity started to evolve. There’s evidence of such an event in the archives of the French Academy of Sciences in Paris.

Antonio Fenoglio was a reputable professor from the University of Bologna, Italy. In 1967, he wrote an article regarding a mysterious discovery from the Archives of the French Academy of Science in Paris.

In the file, he wrote about an incident from the late 1700s, when a presumed UFO had crashed near a village in France. All the town inhabitants witnessed the event, including two mayors, a doctor, and three men described as local authorities.

The story is related by a police inspector named Liabeuf, who in the summer of 1790 was sent from Paris to Alencon to make a thorough investigation of a hazardous incident which occurred somewhere west of the city gates, and had many respectable witnesses.

Liabeuf reached the village, and the details he wrote in his report submitted to the French Academy of Sciences were completely ‘out of this world.’

“At 5 AM, on June 12th, several farmers caught sight of an enormous globe which seemed surrounded with flames. First, they thought it was perhaps a balloon that had caught fire, but the great velocity and the whistling sound which came from that body caught their attention.

“The globe slowed down, made some oscillations and precipitated itself towards the top of a hill, unearthing plants along the slope. The heat which emanated from it was so intense that soon the grass and the small tree started burning.

“The peasants succeeded in controlling the fire which threatened to spread to the whole area.

“In the evening this sphere was still warm and something extraordinary happened, not to say an incredible thing. The witnesses were two mayors, a doctor and three other authorities who confirm my report, in addition to the dozens of peasants who were present.

“This sphere, which would have been large enough to contain a carriage, had not suffered from all that flight. It excited so much curiosity that people came from all parts to see it.

“Then all of a sudden a kind of door opened and, there is the interesting thing, a person like us came out of it, but this person was dressed in a strange way, wearing a tight-fitting suit and, seeing all that crowd, said some words which were not understood and fled into the woods.

“Instinctively, the peasants stepped back, in fear, and this saved them because soon after that the sphere exploded in silence, throwing pieces everywhere, and these pieces burned until they were reduced to powder.

“Researches were initiated to find the mysterious man, but he seemed to have dissolved.”

If the report proves to be authentic, it demonstrates that UFOs have been visiting us for hundreds of years, if not thousands or more.

The highlighted report seems to depict a flying craft that overheated and was eventually forced to execute a brisk landing. In that chaos, the mob quickly gathered to see the cause, and they almost died out of curiosity.

Fortunately there were no victims, and the feedback received from witnesses helped Liabeuf establish a detailed report for the French Academy of Sciences, which proves to be of tremendous use even today, as it narrates a rare event from the past involving an alien craft.

If Lieabeuf’s report is authentic, or only a rumor spread by professor Fenoglio, we are yet to discover, but one thing is certain: the report borrows numerous features from modern-day UFO encounters, and it reminds us of the humanoid aliens depicted in other cases from our modern and post-modern history.