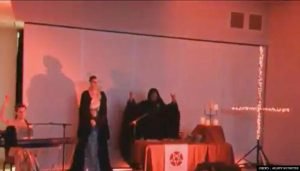 An Australian network has accidentally broadcast a clip of a Satanic ritual during a news report.

The anchor Yvonne Yong was presenting a story about Queensland’s proposal to make killing of police horses or dogs as a criminal offense. Her narrations gets visually cut by a shot of three officers walking down, and then pans back at her.

However, the segment was briefly interrupted by a clip of a Satanic ritual, with a man in a black robe declaring: “Hail, Satan”.

The scene shifted to the visual of three people standing behind an inverted brightly lit, upside-down cross and one of them is seen wearing a black robe like dress with a flowing cape behind, hands held up.

The man dressed in black robe can be seen putting up his hands up and saying “Hail, Satan”.

ABC's satanic slip-up. What was going on here? @abcnews pic.twitter.com/D1dWfjOYhM

ABC TV presenter Yvonne Yong continued with the broadcast after the clip of the satanic ritual aired.

It is not known how the clip of the ritual made its way into a segment on police dogs. ABC TV did not immediately respond to a request for comment from Insider.

A surveillance camera captured an anomaly that looks like a fairy