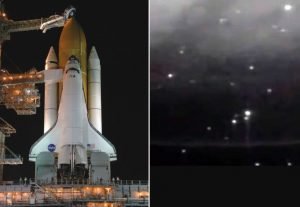 An official NASA video reveals the moment when a bright UFO known as the ‘Boomerang UFO’ performs an impossible maneuver in space, right near the STS-114 mission.

Two and a half years after the tragic loss of Space Shuttle Colombia on February 2013, NASA had finally improved the safety measures and was ready to launch another mission intended to test the new technical characteristics and equipment.

On July 26, 2005, Space Shuttle Discovery was launched into space and was about to perform an almost two weeks journey on the outskirts of planet Earth. Its novel improvements were documented by a series of new and upgraded ground-based cameras, a radar system and airborne cameras aboard high altitude aircraft.

However, the STS-114 mission didn’t go without problems. After takeoff, analysts at NASA saw that a piece of foam had dropped from the external tank.

After Commander Eileen Collins executed the first Rendezvous Pitch Maneuver, which literally flipped the shuttle over, crew members were able to take photographs of the underside of Discovery that immediately confirmed the alleged problem seen after the launch.

Astronaut Steve Robinson was assigned to carry out the necessary repairs. Using an extensive robotic arm, he was able to remove the protruding debris, thus allowing for Discovery to dock with the International Space Station and carry on with its initial mission.

At this point however, a bizarre object was caught on the installed cameras while performing a law-defying maneuvers (at least impossible in regards to our earthly standards).

The spontaneous flip of the craft caught a glimpse of the object that seemed to deliberately stay out of range from the installed cameras. The UFO appeared white and shined bright in contrast to the blackness of space.

It flew relatively close to the shuttle, at a distance that would allow for a clear view of what was going on, and it would have passed as a mere piece of space debris unless it performed an impossible turning maneuver that, for now, can’t be explained by our existing laws of physics.

Have a look at the video below and see for yourself:

To highlight the anomaly, let’s have a look at Newton’s Laws of Motion that state the following: “An object set into motion in the vacuum of space will continue forever in the same course, unless acted upon by an outside force.”

The above video clearly breaks this notion, as the UFO is seen changing its course. Because of the curved trajectory it follows, it has been nicknamed “The Boomerang”, and although NASA has been aware of this peculiar catch, a thorough analysis of the event has failed to make a public appearance.

In fact, the space agency decided to focus on other ‘relevant’ aspects of the STS 114 mission and simply debunked the curious UFO as being a piece of wandering space debris from a satellite.

But is NASA to be trusted? Does this prove that the renowned space agency has more knowledge of UFO activity on our planet than they’re letting us know?

According to the UFO community, the object appears to be intelligently controlled, and it’s easy for anyone to realize this because of the circular trajectory the speeding object takes.

Until this day, the STS 114 UFO remains one of the best (official) evidence of otherworldly visitors we have. Could this be an authentic example of an alien craft surveilling our earthly activity in space? Or rather a natural occurring phenomenon that has been misinterpreted from the beginning?

Whatever the case, this video stands alongside other relevant examples of unidentified objects near NASA’s official missions, both in space and on the Earth.