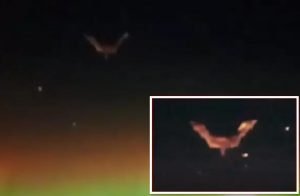 A huge object of a very strange shape, which was located above the atmosphere of the Earth, in space was captured during a live NASA broadcast.

The unusual images that we show you today relate to the presence of a huge UFO captured by a camera aboard the International Space Station.

Typically this camera is used for shooting, recording the northern lights and other similar events occurring both in the atmosphere of the Earth and in near-Earth space.

But during NASA’s live broadcast on June 9, 2021, a colossal UFO was filmed.

NASA has certainly provided no explanation for this UFO sighting. Fortunately, the astronaut-researcher, who often watches the live broadcast from the ISS, was surprised to notice the presence of a huge object and recorded it.

“This video was recorded from NASA’s LIVE YouTube channel with a cell phone and so it looks a bit blurry”, noted the author of the video.

What did the researcher manage to capture?

Skeptics will most likely say that this is just a video processing error, but this is far from the case.

UFO, a living organic creature that can live in space, the secret space object of our military? What is your opinion?