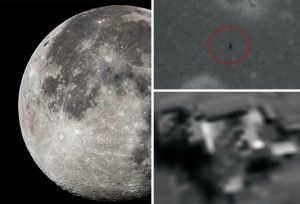 A large secret base has been discovered 40 km away from the Deseiligny crater on the moon. The size of the mysterious object is approximately 235 x 185 meters, reports ufosightingshotspot.blogspot.com.

The base consists of various square and rectangular components (similar to hangars or buildings) and is clearly artificially built.

Since the object is apparently huge, it’s probably fitting that speculation over what it could be is trending to the grandiose: “It’s possible it is some sort of moon base used as a facility for storing and launching alien ‘UFO’ spacecraft,” said Tech and Gadget News.

The inexplicable structure is not the first unusual structure to be discovered on the Moon’s surface.

There are a lot of anomalous objects on the moon. There is only one question – why no one gives answers from where did these structures and objects appear there?

NASA is preparing to send a new message to aliens