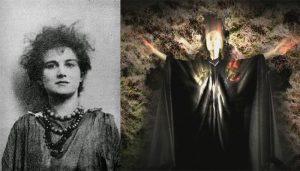 Netta Fornario was born in 1897 in Cairo, to an English mother and an Italian father. When her mother died the year after her birth, her father handed Netta to the care of her maternal grandfather, Thomas Ling in London. At 14, Netta was living away from home in boarding school.

She had been sent to the Ladies’ College, 2 Grassington Road, Eastbourne for a proper Victorian ladies’ education. Netta spent some of her time as a young adult staying in Italy as an Italian citizen, however, in July 1922 she returned to England. Sometime upon returning to England she became involved with the “Alpha et Omega,” a splinter group of the famous Hermetic Order Of The Golden Dawn. Alpha et Omega was rich in occult practices such as ritual magic, tarot cards, mysticism, and a solid belief in the powers of telepathy. And supposedly, Netta had a deep interest in fairies.

In the summer of 1929 she left London for Iona, a small Scottish island rich in folklore and history to perform a magical healing ritual. The 32 year old was not an ordinary woman of the times however, and as well as being a member of “Alpha et Omega, at this stage of her life she was also known to be a vegetarian with long dark hair often worn in plaits, wearing alternative Art and Crafts clothing, rejecting the usual clothing of the times.

She packed an extraordinarily large amount of luggage, with reports saying it included enough furniture to furnish a small house, so she clearly intended to stay in Iona for quite some time.
Once on the island, Netta Fornario found lodgings with a local landlady named Mrs MacRae, who was in the habit of taking visitors under her roof. The two made a rather an odd couple, the humble islander and the occult practitioner, but they developed a of friendship developed between them over the time Netta was there.

Netta spent most of her days wandering the tiny island alone, and spent her nights engaged in various supernatural practices.

For many weeks this arrangement went on without a problem, but something changed as the summer fell into autumn. The first indication that something was wrong was a cryptic message Netta sent to her London housekeeper. It stated that she would be out of communication for awhile, because she had “a terrible case of healing” to work on.

Netta’s apparent distress escalated until the morning of November 17th, when Mrs MacRae woke up to find Netta in a frenzied state of packing her luggage, telling her landlady that she needed to return to London immediately, as several unnamed individuals were attacking her telepathically. She then told McRae about a rudderless boat that went across the sky and about messages she had been receiving in her trances from the other worlds through the veil. At the time MacRae also observed that, in addition to her strange behavior, Netta’s silver jewelry had mostly turned black overnight.

Mrs MacRae told Netta that it would be impossible to travel that day, as the boat to the mainland did not run on Sundays. Netta became enraged and retreated to her room. After several hours, she came back out and calmly announced to Mrs MacRae that she had changed her mind and would be staying on Iona. She then went out for one of her usual daily walks.

Mrs MacRae was used to Netta going off by herself, so she was not immediately alarmed when she didn’t return that afternoon. When darkness came and Netta still hadn’t returned, however, the by now concerned landlady raised the alarm. The night was far too cold and windy for anyone to be wandering the island.

Even though Iona is a small island, it took two days to find Netta’s body. The death site was unusual, to say the least. A cross had been cut into the turf with a dagger, which was found nearby, and Netta’s body was lying on top of it. She was found naked with a thin black cloak covering her, and clutched in her hand was a sheaf of incomprehensible letters from an unidentified stranger. A blackened silver chain with a cross hung around her neck.

The doctor who examined the body could not narrow down the time of death. Therefore, her death certificate says she died between 10.00pm on 17th and 1.30pm on 19th November 1929, when her body was found. He apparently also had trouble determining a cause of death, and settled on either “exposure to the elements” or “heart failure”, neither of which could account for mysterious deep scratches on the heels of her feet, which made it appear as though she had running from something. Her fellow practitioners of the magical arts, unconvinced by the official cause of death given, were convinced that Netta Fornario was killed by a psychic telepathic attack generated by someone many miles away.

At her family’s request, she was buried by the islanders the following Friday with a small and rough tombstone etched with the letters M.E.F, for Marie Emily Fornario.

Stories soon circulated across Iona of strange blue lights reportedly being seen near her body along with a man dressed in a long dark cloak. A number of Netta’s letters were taken by the local police, but it is not known what happened to these letters, and the contents of them have never been revealed.