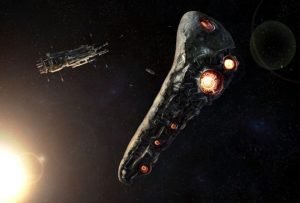 Scientists have explained why the ‘Oumuamua asteroid looks like an alien ship. They identified three arguments in favor of this theory.

The name of the asteroid Oumuamua is translated from the Hawaiian language as “a messenger from afar.”

The celestial body was discovered in images taken at the Maui Observatory in 2017. At that time it was at a distance of 200 million km from the Earth.

After calculating the trajectory of the asteroid, scientists realized that it was flying from outside the solar system. It is assumed that this is a wandering object that does not belong to any galaxy.

At the moment, Oumuamua is beyond the orbit of Neptune and is no longer visible in telescopes.

The first argument in favor of the fact that this celestial body is not an asteroid was its shape.

Due to changes in brightness as it rotates around its axis, scientists were able to establish that ‘Oumuamua has an elongated shape. Its length is 400 meters, and its width is 40 meters.

The second fact was the absence of any accumulation of gas or dust around the object. It is believed to be very hard and contains no ice.

And the most compelling reason that it was an alien spacecraft or drone was the sudden acceleration of ‘Oumuamua in 2018. Something unknown gave it a jet thrust that was directed away from the center of the solar system.

The only logical explanation for this is the release of gas. However, this assumption contradicts the previous fact about the asteroid.