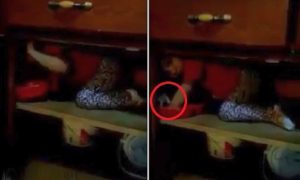 This video (see below) has recently become viral in Mexico, where it was filmed.

In the video, a little girl named Maria Jose climbed onto a large kitchen shelf and crawls there for fun, while her father is filming how his daughter plays.

At some point, next to the girl’s face, a small white hand appears from somewhere in the shelf and seems to disappear right there.

This hand definitely does not belong to Maria Jose, it seems much thinner and completely white.

According to his father, he noticed a strange white hand only later, when he showed a funny video with a daughter to other family members.

Mexicans have folklore stories about how ghosts like to lure young children into different hidden parts of the house – corners, the gaps between the wall and furniture, including cabinets.

NASA reports an asteroid that could collide with Earth

More than 30 intelligent civilizations can exist in our galaxy