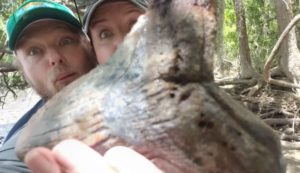 During a stay on the Stono River in southeastern South Carolina, a woman named Jessica Owens found a huge artifact in the sand. After a while, it turned out that it was a megalodon tooth.

The woman called her husband to look at the find. The couple was very excited and at the same time scared: not every day it is possible to know the size of the creatures that lived in the distant past.

Surprisingly, the remains were on the surface of the earth, and not somewhere in the deep sea or at least deep in the soil.

The length of the tooth was 14.5 cm, and the weight was almost half a kilogram. According to the couple, the tooth is simply incredible. They still cannot believe that they possess an item of about five million years old.

It is known that once coastal areas of South Carolina were underwater. As a result, scientists often find here various remains of ancient animals. However, despite the richness of the fauna in those days, finding the elements of the skeleton of a megalodon is a great success.

Megalodon is an extinct species of shark that lived approximately 23 to 3.6 million years ago. While regarded as one of the largest and most powerful predators to have ever lived, megalodon is known from fragmentary remains, and its appearance and maximum size are uncertain.

Most estimates of megalodon’s size extrapolate from teeth; with maximum length estimates up to 18 meters (59 ft) and average length estimates of 10.5 meters (34 ft), and the weight reached 47 tons (94 000 pounds). Their teeth were thick and robust, built for grabbing prey and breaking bone.