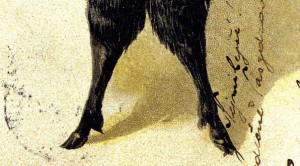 The year was 1855, the date, February 9th. The early morning sun dawned to reveal a clean snow-covered landscape over Devon, in England, U.K.

On more detailed examination, the dazzling Christmas-card scene revealed that something strange had happened during the hours of darkness, something unexplainable and something which struck terror into the hearts of the God fearing folk of Devon.

The white blanket of crisp snow had recorded a odd phenomenon. There, embedded in the snow was what appeared to be a line of footprints, but these were no ordinary footprints…

The paths that the snow had so faithfully recorded were very uncommon in nature. Their shape was distinctly horseshoe or cloven hoof shaped, nevertheless instead of the ordinary pattern of prints that would be normally left by a four legged beast, i.e. two lines of alternating footprints, this pattern was one single line with one print placed directly in front of the other – the walking pattern of bipeds such as ourselves.

The other unsettling fact was that the trail of footprints was said to extend over a hundred miles traversing through five different parishes. As far as the locals were concerned, only one thing had cloven hooves, walked bipedally on it’s hind legs and had the power to cover 100 miles in just a few hours of darkness – and that thing was The Devil! These footprints were the Devil’s own.

Another unsettling aspect to the footprints was that they followed an impossible course. A more-or-less straight line undeterred by any obstacles in it’s path. Where they came up to a wall, the prints just stopped on one side and continued on the other side as if whatever had made the prints had just walked through the wall.

If a house was encountered, the prints just stopped at the house wall and appeared across the roof before continuing on the ground on the other side of the building. The “jump” to the roof apparently being accomplished cleanly and without disturbing any of the surrounding snow.

All obstacles encountered – walls, fences, buildings, rivers etc. were all apparently “walked though” or over in a similar manner.

According to “The Peoples Almanac”, a popular periodical of the time, in order to cover the distance of the prints in one night, whatever it was that made them would have had to be travelling at a speed of at least nine strides per second!

The story was quickly picked up by some of the major newspapers of the day. The Illustrated London News and The Times both discussed what could have possibly caused the phenomenon.

Despite the large numbers of people who were happy to believe that this must be the Devil’s work (or possibly the famous Spring-Heeled Jack), there were others who sought a more rational explanation.

Although how rational the suggestion of the Rev. Musgrave was is a matter of opinion – He suggested that the prints were caused by a pair of kangaroos that had escaped from a local private menagerie!

There was no shortage of other suggestions, ranging from birds to mice but none were able to explain the consistant nature of the trail extending for over a hundred miles of country.

The Legend of Spring Heeled Jack – Man or Myth, London 1837

Spring Heeled Jack terrorised the Victorian people from 1837 onwards, and caused mass hysteria among men, women and children. He quickly became a legend to the Victorian people, who thought that the Devil himself had appeared in London’s streets. Spring Heeled Jack was sighted frequently running along rooftops, roads, streets, cemeteries, parks, and hiding in alleyways, in the dead of night in an effort to waylay his unwilling victims.

It has been suggested by author Geoffery Household that the strange marks were caused by the accidental release of an “experimental balloon” from Devonport Dockyard. His source was said to be a Major Carter, a local man whose grandfather was a worker at Devonport at the time of the incident.

Carter’s explanation was that the balloon had trailed a cable, attached to the end of which was a shackle. It was the shackle, said Carter, which had left the horseshoe shaped indentations in the snow as it bounced across the ground.

Carter had said that the incident was not widely know about because it had been “hushed up” as the escaped balloon’s shackle had created a lot of damage to greenhouses, windows and conservatories in it’s path before it finally came to rest near the town of Honiton.

Although there are many theories as to what the real cause of the inexplicable tracks – images of the Devil’s footprints – that traversed the Devon countryside in 1855, they are nevertheless, just that – theories.

Despite the intervening century and a half that has elapsed since this strange phenomenon occurred, no definitive explanation has ever come to the fore. We may all have our own favourite theories, but the truth of the matter is that even now, nobody truly knows what caused “The Devils Footprints”

Ghost Lights: Unexplained Phenomenon That You could Witness