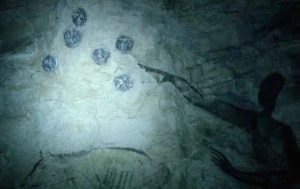 Like many African tribes, the Dogon people of the Republic of Mali have a shadowed past. They settled on the Bandiagara Plateau, where they now live, some time between the 13th and 16th centuries.

For most of the year, their homeland – 300 miles (500 km) south of Timbuktu – is a deso­late, arid, rocky terrain of cliffs and gorges, dotted with small villages built from mud and straw. Although most anthropologists would class them as ‘primitive’, the two million people who make up the Dogon and surrounding tribes would not agree with this epithet.

Nor do they deserve it, except in the sense that their way of life has changed little over the centuries. Indifferent though they are to Western technology, their philosophy and religion is both rich and complex.

Outsiders who have lived with them, and learned to accept the simplicity of their lives, speak of them as a happy, fulfilled people whose attitude to the essential values of life dates back millennia.

The Dogon do, however, make one astounding claim: that they were originally taught and ‘civilised’by creatures from outer space – specifically, from the star system Sirius, 8.7 light years away. And they back up this claim with what seems to be extraordinarily detailed knowledge of astronomy for such a ‘primitive’ and isolated tribe.

Notably, they know that Sirius, the brightest star in the sky, has a companion star, invisible to the naked eye, which is small, dense, and extremely heavy. This is perfectly accurate.

But its existence was not even suspected by Western astronomers until the middle of the 19th century; and it was not described in detail until the 1920s, nor photographed (so dim is this star, known as Sirius B) until 1970.

This curious astronomical fact forms the central tenet of Dogon mythology. It is enshrined in their most secret rituals, portrayed in sand drawings, built into their sacred architecture, and can be seen

in carvings and patterns woven into their blankets – designs almost certainly dating back hundreds, if not thousands of years.

All in all, this has been held as the most persuasive evidence yet that Earth had, in its fairly recent past, an interplanetary connection – a close encounter of the educational kind, one might say.

The extent of Dogon knowledge has also been subjected to scrutiny, in order to establish whether all that they say is true, or whether their information may have come from an Earthbound source – a passing mis­sionary, say.

So, how did we in the West come to know of the Dogon beliefs I There is just one basic source, fortunately very thorough. In 1931, two of France’s most respected anthropologists, Marcel Griaule and Germaine Dieterlen, decided to make the Dogon the subject of extended study.

For the next 21 years, they lived almost constantly with the tribe; and, in 1946, Griaule was invited by the Dogon priests to share their innermost sacred secrets.

He attended their rituals and their ceremonies, and learned – so far as it was possible for any Westerner to do – the enormously complex symbolism that stems from their central belief in amphibious creatures, which they called Nommo, and that came from outer pace to civilise the world. (Griaule himself came to be revered by the Dogon as much as their priests, to such an extent that at his funeral in Mali in 1956, a quarter of a million tribesmen gathered to pay him homage.)

The findings of the two anthropologists were first published in 1950, in a cautious and scholarly paper entitled ‘A Sudanese Sirius System’ in the Journal de la Societe des Africainistes.

After Griaule’s death, Germaine Dieterlen remained in Paris, where she was appointed Secretary General of the Societe des Africainistes at the Musee de I’Homme. She wrote up their joint studies in a mas­sive volume entitled Le Renard Pete, the first of a planned series, published in 1965, by the French National Institute of Ethnology.

The two works make it overwhelmingly clear that the Dogon belief system is indeed based on a surprisingly accurate knowledge of astronomy, mingled with a form of astrology. Lying at the heart of it is Sirius, and the various stars and planets that they believe orbit around this star.

They also say that its main companion star, which they call po tola, is made of matter heavier than anything on Earth, and moves in a 50-year elliptical orbit. All these things are true. But Western astronomers only deduced that something curious was happening around Sirius about 150 years ago.

They had noted certain irregularities in its motion, and they could explain this only by postulating the existence of another star close to it, which was disturbing Sirius’ movements through the force of gravity. 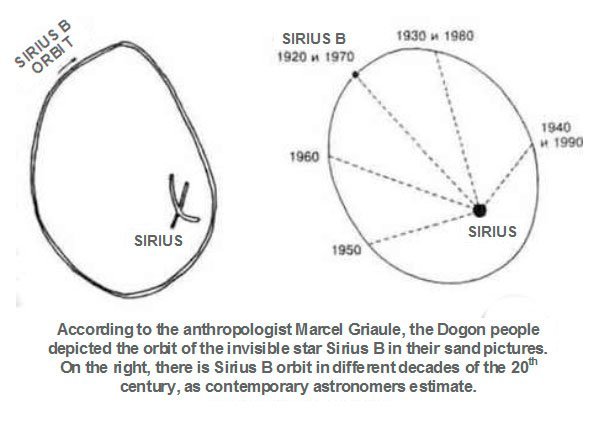 In 1862, the American astronomer Alvan Graham Clark actually spotted the star when testing a new telescope, and called it Sirius B.

However, it was to take another half-century from the first observation of Sirius’ peculiarities for a mathematical and physical explanation to be found for such a small object exerting such massive force.

Sir Arthur Eddington, in the 1920s, formulated the theory of certain stars being ‘white dwarfs’ -stars near the end of their life that have collapsed in on themselves and become superdense.

The description fitted the Dogon version precisely. But how could they have learned about it in the three years between Eddington’s announcement of the theory in a popular book in 1928, and the arrival of Griaule and Dieterlen in 1931?

The two anthropologists were baffled. ‘The problem of knowing how, with no instruments at their disposal, men could know of the movements and certain characteristics of virtually invisible stars has not been settied’, they wrote.

At this point, another researcher entered the scene – Robert Temple, an American scholar of Sanskrit and Oriental Studies living in Europe – who became deeply fascinated by two questions raised. Firstly, was the evidence of the Dogon understanding of astronomy to be believed? And secondly, if the answer to the first question was positive, how could they conceivably have come by this knowledge?

A careful reading of the source material, and discussions with Germaine Dieterlen in Paris, convinced him after a time that the Dogon were indeed the possessors of an ancient wisdom that concerned not just Sirius B, but the solar system in general.

They said the Moon was ‘dry and dead like dry dead blood’. Their drawing of the planet Saturn had a ring round it (Two other exceptional cases of primitive tribes privy to this information are known.) They knew that planets revolved round the sun, and recorded the movements of Venus in their sacred architecture. They knew of the four ‘major moons’

of Jupiter, first seen by Galileo. (There are now known to be at least 14.) They knew correctly that the Earth spins on its axis. And they believed there was an infinite number of stars, and that there was a spiral force involved in the Milky Way, to which Earth was connected.

Much of this came down in Dogon myth and symbolism. Objects on Earth were said to represent what went on in the skies, but the concept of ‘twinning’ made many of the calculations obscure, so that it could not be said that the evidence was totally unambiguous.

But with Sirius B, in particular, the central facts seemed unarguable. Indeed, the Dogon deliberately chose the smallest yet most significant object they could find – a grain of their essential food crop – to symbolise Sirius B. (Po tolo means, literally, a star made of fonio seed.) They also stretched their imaginations to describe how massively heavy its mineral content was: ‘All earth­ly beings combined cannot lift it.’

Temple found their sand drawings particularly compelling. The egg-shaped ellipse might perhaps be explained away as representing the ‘egg of life’, or some such symbolic meaning. But the Dogon were insistent that it meant an orbit – a fact discovered by the great astronomer Johannes Kepler in the 16th century, and certainly not known to untutored African tribes. They also put the position of

Sirius exactly where it ought to be, rather than where someone might naturally guess – that is, at a focal point near the edge of the ellipse, rather than in the centre.

SO how did the Dogon come to have this unearthly knowledge? So far as the Dogon priests are concerned, there is no ambiguity whatsoever in the answer to this question. They believe profoundly that amphibious creatures from a planet within the Sirius system landed on Earth in distant times and passed on the information to initiates, who in turn handed it down over the centuries.

They call the creatures Nommo, and worship them as ‘the monitors of the universe, the fathers of mankind, guardians of its spiritual principles, dispensers of rain and masters of the water’.

Temple found that the Dogon also drew sand diagrams to portray the spinning, whirling descent of a Nommo ‘ark’, which he took to mean somesort of spaceship. As he put it: ‘The descriptions of the landing of the ark are extremely precise.

The ark is said to have landed on the Earth to the north-east of the Dogon country, which is where the Dogon claim to have come from originally. ‘The Dogon describe the sound of the landing of the ark.

They say the ‘word’ of Nommo was cast down by him in the four directions as he descend­ed, and it sounded like the echoing of the four large stone blocks being struck with stones by the children, according to special rhythms, in a very small cave near Lake Debo. Presumably a thunderous vibrating sound is what the Dogon are trying to convey.

One can imagine standing in the cave and holding one’s ears at the noise. The descent of the ark must have sounded like a jet runway at close range.’

Other descriptions that the Dogon priests used to refer to the landing of the ‘ark’ tell how it came down on dry land and ‘displaced a pile of dust raised by the whirlwind it caused. The violence of the impact roughened the ground … it skidded’.

Robert Temple’s conclusions, first published in 1976 in his book The Sirius Mystery, are at once highly provocative and extensively researched.

As such, his findings have been used as ammunition both by those who believe in extra-terrestrial visitations in Earth’s formative past, and by those (includ­ing the majority of scientists and historians) who believe the idea is bunkum.

Erich von Daniken, for instance, whose best-selling books on the subject have now been shown to be based, in the main, on distorted evidence, has welcomed the Dogon beliefs, calling them ‘conclu­sive proof … of ancient astronauts’.

Against him range a number of science writers – among them the late Carl Sagan and Ian Ridpath – who believe the case is by no means proved, and that Temple has read too much into Dogon mythology.

Robert Temple himself, years after first becoming interested in the subject, found nothing to retract from in the answer he gave to his publisher, who expressed his central doubt about the manuscript thus: ‘Mr Temple, do you believe it? Do you believe it yourself?’ Temple answered: ‘Yes, I do. I have become convinced by my own research.

In the beginning I was just investigating. I was skeptical. I was looking for hoaxes, thinking it couldn’t be true. But then I began to discover more and more pieces which fit. And the answer is: Yes, I believe it.’ The crucial question is whether the Dogon’s knowledge could have been obtained in any more ordinary, mundane way.