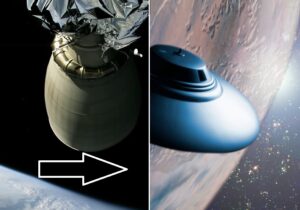 A video captured a mysterious object flying behind a SpaceX rocket shortly after it left Earth.

While the rocket reached the highest point of flight at an altitude of 162 km above the ground, a UFO flew past it.

This is not a satellite or space debris, the object moves with a gain in speed and altitude, and along its trajectory it is obvious that it is flying into open space.

Considering the distance from the UFO to the SpaceX rocket, the dimensions of this unidentified spacecraft are quite impressive. With all this, he does not use any visible propulsion systems.