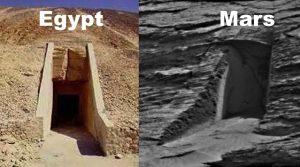 Famous ufologist Scott Waring announced another amazing discovery on Mars. According to him, in recent images of the surface of Mars, he found a mysterious entrance.

The virtual archaeologist draws readers’ attention to the fact that on Mars there is a huge amount of evidence of an intelligent civilization that once existed on the Red Planet.

This time, the ufologist focused his attention on the latest photographs of the Martian landscape taken this week by the Martian rover.

In two photographs, a “doorway” can be seen on the hillside. The entrance is very similar to the ancient Egyptian entrance to the Valley of the Kings in Egypt.

According to the researcher, this “doorway” is about twice the average height of people.

Scott Waring is convinced that this find is one of the clearest evidence of life on Mars. Or proof that life was once there.

At the same time, he expresses bewilderment why terrestrial archaeologists do not pay special attention to the artifacts found in the pictures of the surface of the Red Planet.