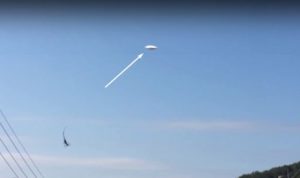 Coincidence or not but within several days a similar UFO has been captured near Palm Springs in California and over a rural area in Korea, reports ufosightingshotspot.blogspot.com.

“I always wonder how with modern technology we get all these horrible recordings of UFOs until today when I witnessed my own, sorry for the quality was driving at high speed. Saw this on a route that I take to work very often I’ve seen clouds around the mountains very often but never like this.”

It is unclear if these objects are real UFOs or airships, but what is striking is that both objects have the same shape and color. Were both witnesses filmed the same flying object?