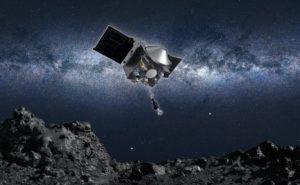 OSIRIS-REx is currently preparing to take rock samples from the asteroid Bennu. The Anomalien.com website will broadcast the landing live.

The representative of the aerospace corporation Lockheed Martin Beth Buck said that the results of the operation carried out by the probe will be known only after two days.

The probe landing maneuver on the asteroid will begin on Tuesday. First, a rod with a device will be deployed, designed for soil sampling. This maneuver will be broadcast live.

The automated station OSIRIS-Rex, which arrived at the asteroid, has been in its orbit for two years, and now the moment of approaching these two space objects is coming.

OSIRIS-Rex will descend on the asteroid for four hours, and then touch its surface for a short period of time (only 16 seconds). The researchers hope that the probe will have time for one single attempt to capture at least a little of asteroid matter.

If successful, the capsule with the samples will be sent to Earth for research. Delivery of samples can take about three years, which means that the “package” should be expected by 2023.

According to NASA scientists, the Bennu asteroid is a kind of time capsule, which contains almost all information about the origin of the solar system.