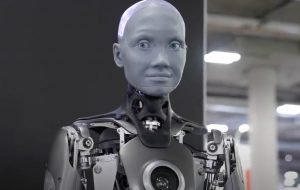 The authors of an ultra-realistic humanoid robot named Ameca wanted to show how they improved its artificial intelligence, so that a humanoid robot can keep up a conversation. For this, the GPT-3 language model was introduced into it, which learns from preliminary requests.

The robot has a fully articulated head and neck, as well as multiple articulations in its face to enable a wide range of subtle movements.

In one clip, a man asks Ameca about a book entitled ‘robots’ that is sitting on the table.
“There’s no need to worry,” Ameca replies. “Robots will never take over the world.”

“We’re here to help and serve humans, not replace them.”

“This Ameca demo combines automatic speech recognition with GPT 3, a large language model that generates meaningful responses. The output is fed into the TTS online service, which generates voice and lip-syncing. While you might think that Ameca’s responses will be scripted, they are not. There is nothing preset in this video – this is pure AI. Pauses are a time delay for processing speech input, generating a response and converting text back to speech,” the developers said.

During the “interview”, the robot stated that he was depressed due to a difficult week, and sang a song he had generated. He also alerted the audience somewhat because he averted his gaze during the question of the rise of the machines.

Note that Ameca was first introduced in December 2021. He scared a lot of people with his eerily realistic facial expression, but also surprised them with her skills.