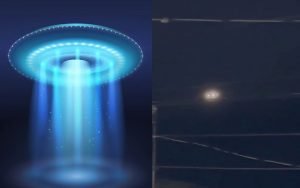 Several people in Mexico posted a video of a mysterious UFO that circled the night sky. Reportedly, a strange event occurred last Wednesday evening in the town of Tequila, located in the state of Jalisco.

According to coasttocoastam.com, at least four groups of people who were out that night spotted the peculiar sight, which resembled a set of glowing lights that seemingly slowly spun in the sky until vanishing into thin air.

By virtue of the event having so many witnesses, it wound up being captured on film from multiple vantage points, which allows for a rather unique perspective on the peculiar aerial anomaly.

An increasing number of unidentified flying objects have been reported in the sky over the past 20 years, a top US defense official told lawmakers in the first public hearing on UFOs in half a century.

“Since the early 2000s we have seen an increasing number of unauthorized and/or unidentified aircraft or objects in military controlled training areas and training ranges and other designated airspace,” Scott Bray, deputy director of Naval intelligence, told a House security panel.

Scientists told whether Artificial Intelligence is capable of attacking humanity