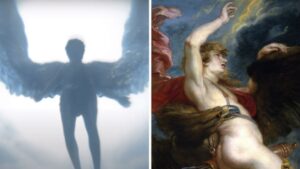 Do you know that Adam had a first wife and her name is Lilith? Most of us are familiar with the story of creation as told in the Bible. In the holy book, God first created man then when He saw that he is lonely, He took a rib from him while he was asleep and from it he fashioned the perfect companion for Adam, a woman whom Adam eventually called Eve.

But according to one legend, Adam actually has a first wife, who later became known as Lilith. The legend says that Adam was not pleased with this first wife of his and he asked God for a replacement and that led to the creation of Eve, a partner more suitable for Adam.

Another Version of Creation

The legend of Lilith or the story of Adam having a first wife was used by ancient rabbis to reconcile two contradictory accounts of creation. The version we are familiar with is the one mentioned above.

But there is another version of the story of creation and in can be found in Genesis 1:26-27. According to the passage, God made man and woman simultaneously. So the first partner of Adam could not have been Eve.

The attempt to reconcile the conflicting versions of the story of creation lead to the development of a complex system of interpretation known as the midrash system. Midrashic texts also influenced some Christian interpretations of the Bible.

Scholars are unsure whether the name Lilith was actually mentioned in the Bible. In the Book of Isaiah 34:13-15, the word lilith appeared which is actually a Hebrew name for one of the eight unclean animals.

The character may also have originated from the Mesopotamian myths regarding female demons or succubae called Lilin. Some experts believe that the name came Lilith from the word Lillu which are female vampires in Sumerian myths.

The legend of Lilith is also similar to the legend of Lamatsu from a Babylonian myth. Lamatsu was a demon goddess who kills babies and sucks the blood of adults. Like Lamatsu, Lilith was also portrayed as a baby killer who brings fatal diseases to infants.

A particular depiction of Lilith – that of being a winged figure with sharp talons – can also be considered as vampire-like. Could it be that Lilith was the first vampire?

A Bad Wife and Demon

There are four occurrences of the name Lilith in the Talmud, one of the holy books of Judaism. But the name has only been associated with the Adam’s first wife in the medieval text known as the Alphabet of Ben Sira.

In text, Lilith was portrayed as a bad wife to Adam who eventually turned into a baby-killing demon. According to the text, Adam and Lilith fought all the time because they don’t agree on many issues. Lilith eventually left Adam in the Garden of Eden. God commanded three of his angels to go after Lilith to make her go back to Adam, by force if needed.

The angels caught up Lilith in the Red Sea but they can’t convince or even force her to return to the Garden of Eden. Eventually, the three angels were able to strike a deal with Lilith where the woman agreed not kill babies who are wearing amulets with the names of the three angels.

Since then Lilith has been known in Jewish folklore as a female demon who afflicts babies with diseases. In some legends, Lilith is portrayed as the Queen of Demons. She is also known to seduce men in their sleep in order to spawn demon children.

The legend of Lilith also appears in Kabbalsitic mysticism. In fact, there are several versions of her creation in Kabbalistic writings. In one version, she is said to be created on the fifth day even before Adam was created by God.

It is said that she was among the water creatures that God has created. In another version, Lilith was created shortly before Adam and the two were made from the same substance.

In a third version, it is said that Lilith was a creature contained inside Adam. In the story, thousands of evil souls attempted to attach themselves to the body of Adam. God drove them away but this has left Adam without a soul.

God breathed life into Adam and when he came to life, the female – Lilith – was attached to his side. God separated the two but then Lilith began to fly to the Cities of the Sea to attack humans.

In yet another version, Lilith as said to be a divine entity that appeared spontaneously either as an aspect of God’s power or from the Great Supernatural Abyss. In the Kabbalistic tradition, God has an aspect that is affiliated with evil and in this version of Lilith’s origin it is said that she came from the lowest manifestation of God.

The legend of Lilith is not officially recognized by Christian denominations. In the late Middle Ages though, she is sometimes identified with the serpent that tempted Eve and Adam in the Book of Genesis.

Some depictions of the serpent during the period show a snake with a woman’s torso and head. One popular representation of Lilith can be found in the doorway of the Western facade of the famous Cathedral of Notre Dame in Paris, France. In it. Adam and Eve was shown and between them is a figure of a bare-breasted woman with the lower body of a snake.

Lilith and the Human Psyche

Lilith can serve as a representation of the aspects of women that men fear – the rebellious quality, the sexual aggressiveness, the anti-mother. The effort to hide Lilith actually reflects the repression of sexuality, particularly among women.

The tendency to demonize Lilith points to a subtle effort to make both men and women loathe the qualities she represents. It is no wonder therefore that many feminist movements view Lilith as some sort of role model in their quest to subvert the existing patriarchal system.