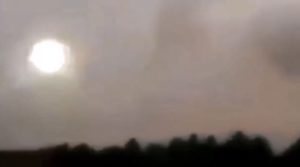 On two separate occasions, three Orbs from which two of them flew right overhead a car, as well as a weird cluster of Orbs or maybe it was one giant UFO, were captured in the sky over New York.

The first event occurred on October 14, 2020 when a cluster of orbs or maybe one giant UFO mothership appeared in the sky over Syracuse, New York, reports ufosightingshotspot.blogspot.com.

The lights all stayed together hovering in 1 spot in the sky.

The second event occurred on October 17, 2020 when 1 big Orb and a smaller white Orb and black Orb appeared in the sky over Utica, New York.

Then suddenly the smaller black orb and the big Orb flew right overhead the car to leave the photographer horrified (Mufon cases: 11851 – 1183).