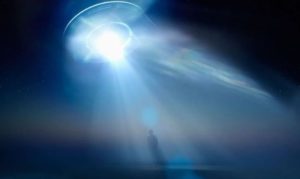 On February 28, 1959, US Army Private Gerry Irwin, a Nike missile technician, had been driving back to El Paso’s Ft. Bliss from leave in Nampa, Idaho when he spotted a bright object streak across the sky over Route 14 in Utah.

When the glowing object disappeared behind a nearby ridge, Irwin feared it might have been a downed aircraft. He pulled over and wrote a note indicating he went to investigate a possible crash, which he placed on the steering wheel of his car. He then wrote STOP on the side of his car with shoe polish and headed into the night.

Some time later, a Fish and Game inspector stopped when he saw Irwin’s car. After reading the note, he inspector headed for the Sheriff’s station in nearby Cedar City. Less than an hour later, Sheriff Otto Pfief and a contingent of deputies and volunteers headed after Irwin.

The men hadn’t traveled far when they found the Private laying unconscious on the ground. He was rushed to a nearby hospital where Dr. Broadbent examined the officer, declaring him to be in good physical condition. It was unclear as to why the man had lost consciousness.

A day later, Irwin finally awoke. He was confused and frightened. Where was he? What happened to the plane crash? He also seemed to be missing a jacket. Those who found him, however, related that he had no jacket on when he was found.

Once he was feeling better, Irwin–still with more questions than answers–returned to Fort Bliss where he was admitted to William Beaumont Army Medical Center for further analysis.

He was again released for duty but within minutes of walking back to the base, Irwin again passed out. He was taken to El Paso’s Southwest General Hospital. He awoke the next day, asking if there were any survivors.

Once again, he was taken to William Beaumont Army Hospital, where he was placed under observation by psychiatrists. After one month, extensive testing could find nothing wrong with him, so he was released on April 17.

The next day, Irwin was seized by a powerful impulse that made him take a bus from El Paso to Cedar City, arriving on April 19. He then walked back to the field in which the Sheriff’s party had found him.

He found his jacket on a bush. There was a pencil stuck in one of its buttonholes with a piece of paper wound tightly around it. Irwin burned the paper and then seemed to come out of some kind of trance. He could not recall the path back to the road or why he had come there.

He made his way back to Cedar City and turned himself in to Sheriff Otto Pfief, who told Irwin about his first encounter on the 28th of February. Once again Irwin returned to Fort Bliss and was given psychological examinations.

On July 10, he again entered William Beaumont Army Hospital. He was discharged again, but on August 1 he failed to report for duty, and one month later he was listed as a deserter.

After this Private Gerry Irwin disappears from the public view, and his current (if he is still alive) whereabouts are unknown.

– Irwin had been on leave in Nampa. Had he suffered some traumatic event while on leave, which caused him to have a hallucination or some other experience?

– Was Irwin visiting family in Nampa? Wherever they lived, have they ever been located and contacted to help explain Irwin’s behaviour?

– The US Army doesn’t usually let “deserters” just walk away. Did they ever locate him, and find out what actually happened?

– What did Irwin mean when he said “Are there any survivors?” when he was in the hospital?

These Terrifying Stories of Shadow People Will Stay With You