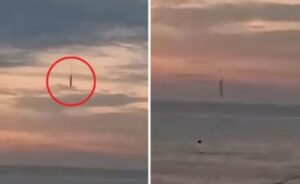 The bizarre footage of the long, black object plunging into the water was filmed at Jangkar Beach in East Java – with some people claiming it was a damaged UFO.

A long, black object plunged from the sky at Jangkar Beach in East Java, Indonesia.

In the footage, you can see a black cylindrical object gently descending towards the surface of the water. Then the unidentified object disappears under the waves.

The video was posted on Facebook with the caption: “What is this anchor thing that fell from the sky?”

The footage surprised the Indonesian government space agency so much that it decided to conduct a thorough investigation into the incident.

Emanuel Mumpungi of the National Institute of Aeronautics and Space said a team of experts headed to the scene.

So far, no wreckage has been found.