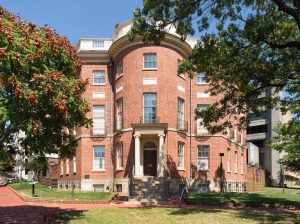 The Octagon has a rich history, several legends, is home to multiple ghosts and has poltergeist activity. It was the scene of tragedy which some of the haunters repeat.

Colonel John Tayloe III built the Octagon in the 1800s. President Madison and wife Dolley temporarily lived there after the White House was destroyed by British fire during the War of 1812. It was the scene of tragedies.

One of the daughters wanted to marry an Englishman which enraged Tayloe. They argued on a staircase. She fell to her death. A second daughter eloped and returned to the house to ask Tayloe’s forgiveness.

She fell to her death from a staircase. It is not known if these were accidents, suicides or murders. A gambler was, allegedly, killed when he was caught cheating.The building was a residence, girl’s school and the US Hydrographic Office. Now the American Institute of Architects owns it. The Octagon houses an architectural museum open to the public.

The ghosts of Tayloe’s daughters haunt the staircase from which they fell. People have seen a candle’s flame flicker, ascending the staircase, heard a shriek and the sound of something thud at the bottom of the stairwell.

Dolley Madison’s ghost has been seen, accompanied by the smell of lilacs, her favorite perfume.

People have heard bells ringing. One account, written by Tayloe’s granddaughter, states that this started after the man died and continued after their wires were cut. Another is that the gambler, while he was being killed, pulled the bell chain to steady himself.

A legend is that dead slaves who were whipped or starved by a former owner visit the Octagon and ring bell as announcing their presence.

Other legends are that the Octagon housed dying and wounded Union Army soldiers and was part of the Underground Railway.

Other supernatural phenomena include moans, thumps inside walls, screams, swords clanking, smells of food cooking, sighs and human footprints in otherwise disturbed dust. People have seen revenants going through the door to the garden and on the stairways. A doctor saw a man dressed in an 1800-style military uniform.

The phenomena happen during daylight and in darkness.

The sightings, smells and some of the sounds can be explained by parapsychological theory. These are hauntings, energy imprinted in time and space without intelligence. There have been no reports of any of the ghosts having intelligence.

Historical facts: John Tayloe built the house. He and his family and the Madisons lived there. Undoubtedly, the daughters’ deaths were documented.

There are two types of legends. One may be fact that has is no documented proof. The other is a figment of imagination, repeated to others.

Commonly, there are different versions of these legends. There are also facts that have been embellished to the point that legends are born.

What remains is that the ghostly happenings in the Octagon have been reported by many witnesses.

The Spirit Of The Shape-shifting Old Hag