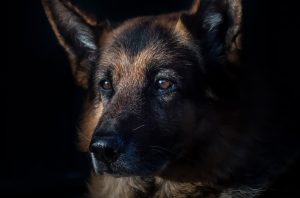 In life, the dog saved a girl from drowning during a tempest, but died while trying to save another. People would see the ghostly German shepherd before hurricanes hit.

Two girls had individual experiences with a mysterious German shepherd in the Caribbean Sea off of the Bahamas. Later, they met at a party. One of the girls saw the dog and it followed her home. The animal’s mistress told them about Sheba.

The nine year old girl was walking on the deck of her parent’s sailboat, the Sea Ya, anchored a quarter mile from land in Walker’s Bay. She was a poor swimmer and wore her life jacket when she walked there, but this morning she carried it.

Chelsea was so engrossed in watching pelicans that she tripped over a coiled rope, dropped her life jacket and fell into the Caribbean.

She fought her way to the surface and was dragged under the sea. While she was struggling, she felt something tugging on her t-shirt, pulling her upward. Chelsea turned and saw a German shepherd.

She held onto the animal’s hind leg as the dog swam toward shore’s safety. The dog barked loudly several times towards the direction of the Sea Ya. When the barking stopped, the dog vanished.

Ken and Ellen, Chelsea’s parents, noticed she was missing and found her life jacket. They were frantic until they saw her on the shore waving to them. The girl told them a German shepherd saved her life, but they didn’t believe her.

The twelve year old girl carried her mask, snorkel and flippers as she walked to the bay. She was an excellent swimmer and swam to a coral reef.

Rachel was suspended over a starfish when she saw a shadow move across the sand below. She looked up and saw a German shepherd swimming toward open water, so she climbed upon a rock to watch the animal.

She saw two adults and a young girl on the beach. Rachel yelled to the dog to come to her, but the animal barked several times before disappearing under water.

Chelsea and Rachel met at a party that night. Rachel saw a German shepherd and said she wanted to catch it. Chelsea looked and was surprised. She was the dog who saved her life.

They followed the dog to her home where she laid down on the porch. The girls were exchanging their experiences with the dog when the door to the house opened. The homeowner, Janelle, looked at the girls, then, jokingly, asked Miss Molly, her dog, if she brought them there. She invited Chelsea and Rachel to stay for a while.

The girls told her about their encounters with the German shepherd. Janelle assured them the dog wasn’t Miss Molly who hated water, then told them about Sheba who had been sighted since the late 1800s.

Then, the sailing ship Richmond was traveling from Cuba to Bermuda. Among the passengers was the Winchester family with daughters, Polly and Nancy, and Sheba, their German shepherd.

When they were two days from Cuba, a strong hurricane struck the ship. The Winchesters and Sheba huddled below the deck. Finally, the hull split and the girls hung onto Sheba, but powerful waves tore them apart.

The dog found Nancy, pulled her to shore with the girl hanging onto her leg, then heard a faint cry. It was Polly calling her. Although Sheba was exhausted, she swam to rescue Polly. They never made it to shore.

Since then, before hurricanes hit the island, people have seen a German shepherd swim out to sea, then vanish.