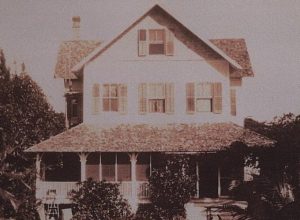 Tweedale, a Spiritualist minister, described the phenomena of the Tweedale haunting in the Yorkshire manse in the April 13, 1913 edition of the New York Times.

He described the phenomena as something that resembled a poltergeist. Whatever it was, it liked to throw objects around, but never hurt anyone.

The case was investigated by noted psychical researcher W. W. Baggally, a member of the Council for the Society for Psychical Research, SPR, the oldest and highly respected parapsychological organization.

The activity began in November 1910 and lasted into 1911. It was believed that the manifestations were created by Tweedale’s aunt, Leah Coates, who died on April 13, 1905.

The phenomena that the minister objectively documented were diverse. They included human and animal phantasms, ghostly voices, the Tweedale’s gong sounding without human help, objects moving for no apparent reason and rappings by which the Tweedales communicated with the entity.

The minister’s wife, mother, son, daughters and a servant were the first to witness the phenomena when they saw phantasms. After the first sighting, there were more ghosts sighted and otherworldly voices were heard.

After many encounters, the spirit revealed her name — “Leah” — in front of six witnesses. Finally, the people realized Leah wanted an inscription carved on her tombstone. Although this was done, this ghostly visitor was still seen and heard.

One Christmastide evening, the minister and others saw Leah, dressed in a flowing white robe walk through a wall and the Christmas tree. Tweedale tried to seize her, but she ran down the hallway.

He called to his wife and two others who were going up the steps to the corridor to try to catch Leah’s apparition, while he ran into the hall. They tried to capture her, but she walked through them. They also heard an invisible dog barking.

On January, 18, 1911, during the day, Mrs. Tweedale and three daughters saw the ghost of a white dog go up the stairs. They followed it to a bedroom and watched as it went under a bed. On the same day, Ida, a servant, saw the phantom go into another bedroom.

This was a prelude to more sightings of this phantasmal creature. Once, Mrs. Tweedale saw the spectral dog and Leah’s apparition. One day, the phantom canine jumped at Mrs. Tweedale and knocked the oil lamp from her hand. The glass was shattered and oil was splattered on the wall.

Mrs. Tweedale was able to provide a detailed description of the dog. It had extremely short hair and she could see its skin. The animal shivered continually. She hadn’t seen the dog, who died about five years prior to Leah’s death, nor had the other witnesses. There were no photographs of the animal.

Tweedale recorded the description and noted that it was accurate. The dog was a short-haired terrier and its skin showed through the white fur. The animal, in life, shook with eager, nervous energy.

On March 5, 1911, Mrs. Tweedale had a bizarre conversation with an entity they called “The Voice.” When the talk ended, Ida and she saw the dog run up the stairs and leap at the gong, making it ring.

In the earlier days of psychical research, as it was called then, generally, the burden of proof was solely upon the witnesses. In this case, a respected member of the SPR, skilled in investigations, W. W. Baggally, did an extensive investigation and other SPR members visited the vicarage.

While it’s very rare that apparitions are seen along with poltergeist activity, the otherworldly phenomena were declared genuine.